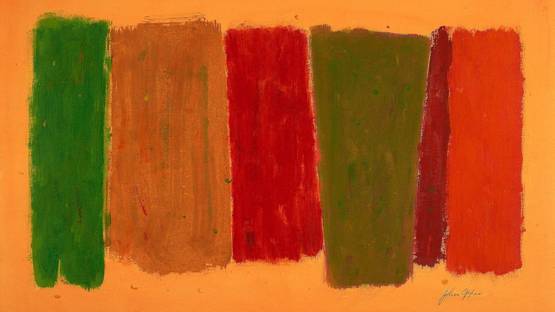 Active as a painter for over six decades, John Opper was an early member of the New York School. Over the course of his career, he transitioned from creating abstract gestural works, in which he drew inspiration from the natural world, to a pure form of abstraction.

Academically trained like many of his contemporaries, Opper came to New York in 1934, two years after his graduation from Case Western Reserve University in Cleveland, Ohio. Two years later, he became a founding member of American Abstract Artists, a group formed by New York artists to promote and exhibit a style of art that was then derided by critics and shunned by collectors. He became celebrated for his handling of color and the dramatic intensity he would create with it on a picture plane.

In 1990, he recalled: “I orchestrate color, line, and shape. My whole purpose is to produce an aesthetic response.” He believed that art is its own experience - an end in itself rather than a means to communicate other concerns, bespeaking a sublime relationship between the artist and his work.