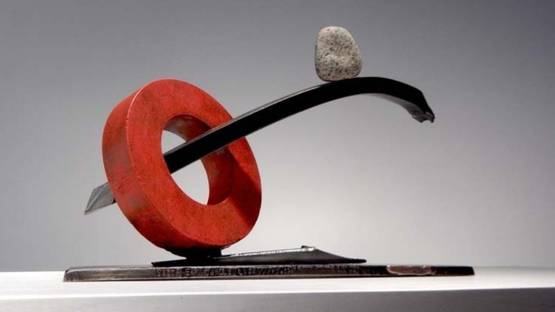 John Van Alstine is an American contemporary artist known for his sculptures made of stone and metal, usually granite or slate, and found object steel. He uses stone as an assemblage element (the way a welder uses steel) rather than in the traditional manner of subtraction. In contrast to the stone and its timelessness, the found-object metal (sometimes cast bronze) is time-specific - 20th century industrial. John Van Alstine studied at St. Lawrence University, Kent State University (BFA in 1974), and at Cornell University (MFA in 1976). He worked as an assistant professor of fine arts at the University of Wyoming in Laramie and the University of Maryland in College Park, where he taught drawing and sculpture until 1986 when he moved to the NYC area to pursue studio work full time.