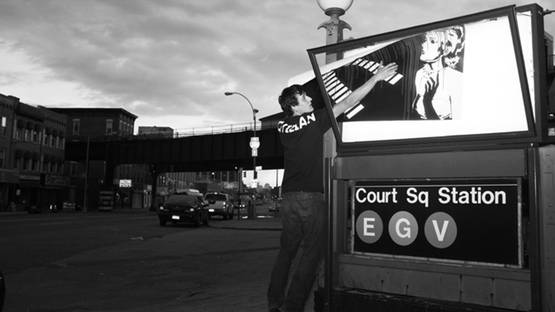 Regardless of where you live, billboards of various shapes and sizes have become one of the primary ways of advertising in contemporary society. You may like or dislike what the ad is showing, but whether you like it or not, it’s hard to avoid and alter this big visual influence in the everyday. However, there are some that are fighting the inevitability of this content, mostly comprised of artists and activists. One such person is Jordan Seiler, a New York-based public space artist known for his long-term project titled PublicAdCampaign for which he takes over billboards to use them as canvases for his own pieces. Seiler's works are characterized by minimalistic formal style and concentration on graphic shapes.

PublicAdCampaign project started at the beginning of the millennium while Jordan Seiler was attending The Rhode Island School of Design, and in the following years has become a collective movement with over a hundred street artist involved. Activating public space by challenging outdoor advertising’s predominance, the group’s mission is not to wreak havoc, but to make more democratic and open public visual surroundings. Armed with acts of civil disobedience, each undertaken project attempts to reconsider the function commercial media has in our public lives and ensure new visions of how we might revitalize our cities.

One of the most significant projects of PublicAdCampaign was New York Street Ad Takeover (NYSAT) which targeted NPA City Outdoor, the company that had been doing illegal street-level billboard advertising in New York City. Because NPA City Outdoor were operating illegally, Jordan Seiler was capable of persuading 30 regular citizens to join him in a coordinated buff, which would turn over approximately 20,000 square feet, or 120 illegal street level billboards into white canvases. All the whitewashed canvases were then painted on by artists such as I AM, Ji Lee, Erin, and Over Under, who volunteered to bring their work to the streets as part of civil disobedience project NYSAT. Between the two NYSAT projects, nine people were arrested and spent a total of 310 hours in prison collectively.

AR I AD Takeover, also known as NO AD, is a project realized in collaboration between PublicAdCampaign, The Heavy Projects and Jowy Romano of Subway Art Blog under the umbrella of Re+Public. AR I AD Takeover was the exploration of augmented realities capacity to function as a significant ad blocker in public space, and is currently being rebooted as NO AD, a mobile app for iOS and Android that turns NYC subway ads into original street art by Ron English, John Fekner, PosterBoy, Dr. D, and OX who contributed their artworks. Jordan Seiler is also an important member of NO AD DAY campaign which sets a day when artists and activists from different parts of the world join their forces against the commercialization of public spaces, at the same time upsetting the normal viewing habits of the citizens. On NO AD DAY 2014 over three hundred advertisement posters on the streets worldwide were removed.

One of the PublicAdCampaign’s most ambitious project to date is known as Yeah We Got Keys for That which started in 2013 when Seiler began making and distributing to artists from different parts of the world double keys to bus shelter advertising kiosks from various countries. His main idea was to give artists the tools to take back their visual environment, literally — with Public Access. After Seiler had built up an inventory of various key designs with maps of where each design works, he opened up the project to the general public in 2015 by posting links for free download of each design as a 3D printable file so everyone could join the practice of taking down commercial ads from public spaces. Access keys have been cast for many cities around the globe, including New York, Boston, Washington D.C., Los Angeles, Miami, Melbourne, Paris, Madrid, Barcelona, and Brussels, among others.

Speaking of the success of his oeuvre, Jordan Seiler has participated in numerous exhibitions and festivals worldwide, including NuArt 2012, and The Experiment at the ICA in Boston, 2012. His solo shows include Taking from the Tip Jar at Vincent Michael Gallery in 2011, and Removal Satisfies the Condition at The Canal Chapter in 2006. Pushing the limits in his line of work, Seiler’s art is visually astounding while maintaining the purpose of augmenting public advertisement. With his recent practice including “living,” augmented reality pieces that further demonstrate both his artistic skill and message being conveyed, there’s no telling what he might bring to the table next.