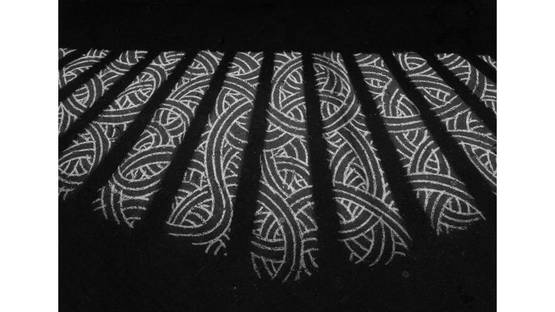 Jordane Saget is a French artist born in Pithiviers, in 1980. He leaves and works in Paris.

Self-taught, Jordane Saget embellishes Paris with his arabesques, and has done so, for a little more than year. From his secret diary to the street, he draws with chalk, ephemeral art in the subway, (Concorde metro station was his first gallery), on pavements and on the famous Fürstenberg square (his biggest horizontal artwork), around the columns of Buren (his unfinished work), on carriage and building entrances. These arabesques, composed of three white lines, are much more than a simple ornament of the urban decor, they play with the architectural disorders and invite us to follow them until we get lost in our own imagination.

During Bizarro 2016 (multiple galleries itinerary and exhibition), organized by the Gallery Géraldine Banier, Jordane Saget decorated the mirrors of the Hotel, in Saint-Germain-des-Prés, a four hands artwork with Jean-Charles de Castelbajac. He gives up on this occasion the pen name J3 and presents his first geometrical paintings.

His photos reveal a new stage of his work: a game with the lights of the city, the hollow of the shadows, the ghost tracks of buildings and urban furniture.