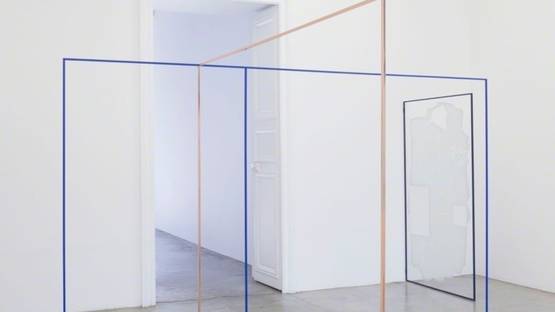 A Mexican contemporary artist, José León Cerrillo works with simple geometric systems to deconstruct the legacies of modernist design, architecture, and art. His objects, sculptures and installations echo the space in which they are presented while at the same time deconstructing it.

Born in 1976 in San Luis Potosí, Cerrillo currently lives and works in Mexico City. He received his BFA from School of Visual Arts, New York, US and MFA from Columbia University, New York, US. his work has been exhibited all around the world, including Mérida, Mexico, Stockholm, Sweden, Paris, France, Hong Kong, China, Miami, US, Copenhagen, Denmark and Basel, Switzerland, among others.

Cerrillo is best known for his large metal forms, which act as framing devices for exhibition spaces, and glass panels layered with geometric figures. These bodies of work are supposed to reference the modernist vocabularies advocated by Russian constructivism and the Bauhaus school. By arranging the symbols and forms in a meaningless ways, the artist means to suggest the failure of modernism, highlighting its status as a purely formal language. He recognizes the language’s promise of uniform interpretation as a “system of meaning with inherent flaws and implied power structures.”