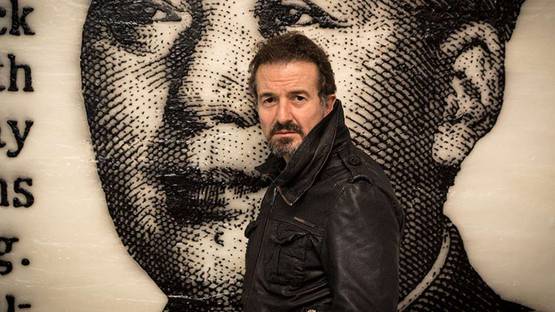 José María Cano is a Madrid-born musician and visual artist known for paintings that are focused on current issues like human rights, prostitution, capitalism, and wars like the one in Iraq. But his art also includes events and persons from his personal life as the letters of divorce or images of his son. It is not strange to him to include characters from the financial world seen in a variety of renowned magazines, as well as the bulls, which is to some extent the homage to his Spanish roots. He combines diverse techniques that vary from oil to resin, canvas to paper, considering himself the alchemist, who paints what he feels at the moment.

The artist became widely popular in the 1980s as a member of Mecano, the pop band formed by Cano and his brother Nacho, who were joined by singer Ana Torroja. Mecano became one of the most successful Spanish pop bands of all time, reaching over 25 million albums worldwide. Since the band separated in 1992, Cano has focused mostly on visual art as a painter. Although interested in drawing since an early age, he started his professional career as a visual artist in the beginning of 2000th. His debut show, commissioned by Ambra Medda in 2004, was attended by Mexican gallerist Ramis Barquet who commissioned his first commercial exhibition. José studied architecture at the Rafael Hidalgo de Caviedes academy, and later at the Artaquio academy.

Since the band separated in 1992, Cano has focused mostly on visual art as a painter

Diverse Themes in his Works

His most famous series is titled The Wall Street 100 from 2006 and are consisted of 100 large-scale portraits based on newspaper clippings taken from one of the leading international daily newspapers - Wall Street Journal. Considering people like Bill Gates, Milton Friedman, Barack Obama, Alan Greenspan and Silvio Berlusconi only from an economic viewpoint, he depicted them like prophets. In other pieces, Cano uses his own childhood as inspiration. These works show his desire to gesture towards the simplicity of childhood in his paintings. With echoes of Roy Lichtenstein and other famous pop artists, these works utilize images from the comics the artist enjoyed reading. On the other side, there are paintings that have a more spiritual note, as the paintings of apostles or the ones which include the moon.

There are paintings that have a more spiritual note

Other Interesting Facts and Exhibitions

The Spanish artist is also known as the author and composer of the world-famous opera Luna from 1992 in which Placido Domingo and Renée Fleming took the lead roles. He’s also the author of the music anthem of the football club Real Madrid. His pieces have been shown in numerous galleries and museums around the world alongside the artworks of the legendary Picasso or Goya. José’s art has been part of collections in cities like London, Hanoi, Madrid, Beijing, Tokyo, Dallas, and in other parts of the world.

He lives and creates in Spain