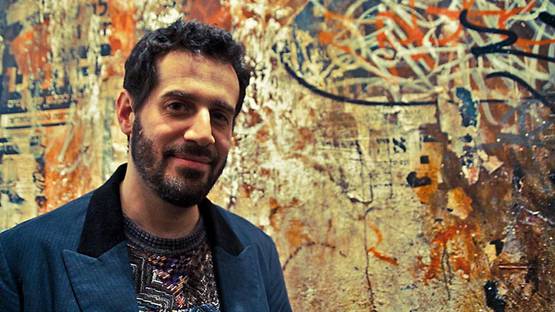 Jose Parla (American, b.1973) is a painter and historical transcriber who records his experiences using palimpsestic code and calligraphy. Parla is also a visual raconteur who creates his work using backdrops, such as city walls marred from years of neglect, to tell the story of distress that he encounters in various places he visits. Parla was born in Miami, FL, to Cuban parents in exile.

Parla has received critical acclaim for his works, which lie at the boundary between abstraction and calligraphy. Composed from layers of paint, gestural drawing and found ephemera, his work evokes the histories of urban environments. Parla is a documentarian of city life. Using the backdrop of New York City and many other towns, he re-makes in paint what can appear to be photorealist fragments of what he sees in the chaos and rush of the metropolis. His paintings reflect the accumulated memories and experiences, the walls that show a place that was, but no longer is — built over, renewed in some other configuration. Parla paints revelations — transcriptions of the process — proof of the history of our neighborhoods. Parla’s work shows that words, signs, and marks come to mean more; over time, in this symphony of diversity, both incongruous and in harmony, that surrounds our contemporary life. His practice originated in graffiti’s experimental and collaborative approaches during the eighties. These markings expose his drive to say or divulge the passing of time, in the moment.

Parla started painting when he was just 10 years old. In 1989, he received the Francis McCommon Scholarship to the Savannah College of Art & Design in Georgia. Parla continued his studies in the 1990s at the New World School of the Arts in Miami, FL, where, under Mel Alexemberg (American, b.1937), he studied advanced painting. He also received a Scholastic Art Award in 1989. Parla uses calligraphy painting and graffiti on city walls to tell visual stories that interpret the urban world as a living continuing history.

In 2000, the artist began to exhibit his series of prints and paintings in various solo exhibitions in Atlanta, GA. Parla named his first Miami, FL, solo exhibition Cityscapes. He held this exhibition in 2006. Since then, Parla has exhibited Layered days in New York in 2008, Reading through Seeing in Hong Kong in 2009, and Walls, Diaries, and Paintings in New York in 2011. Parla has also participated in group exhibitions including The New Yorkers held at the V1 gallery in Copenhagen, Denmark. The artist has made a great contribution to Modern Graffiti Art, using it as a tool for city walls to tell the history of the people in the cities. Parla's exhibition artworks Walls, Diaries, and Paintings and Character Gestures have also been published as books of the same name in the years 2011 and 2012, respectively.

Recently, Parla has collaborated with anonymous artist JR (French, b.1983) to paint street murals in Havana, Cuba. The artist has made enormous contributions to Street Art through calligraphy and graffiti; he is a notable artist in the rapidly growing Street Art Movement. Parla has been invited to exhibit his work and lecture at the MAC Museum and Whitworth College in Spokane, WA. His works can be seen at the Brooklyn Academy of Music, New York, NY, The Burger Collection, Hong Kong, and in the streets of Havana.

The artist lives and works in Brooklyn, NY.