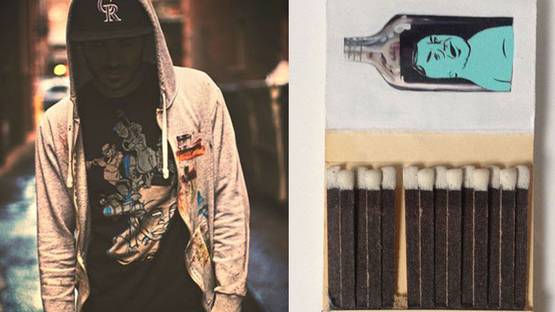 Joseph Martinez is a rising contemporary artist born 1983 in Denver, Colorado. His ability to create such small figures using oil paint on the inside of matchbook covers in a clear way is remarkable.

He has been featured in numerous publications this past year including Juxtapoz and Huffington Post Arts. He has shown his work around the United States, he has exhibited in group exhibitions in San Francisco and Chicago, among other places. “Steady Hands, Blurry Vision” marks the artist’s first exhibit with SOZE, first exhibit in Los Angeles, as well as his first official solo show in an art gallery.

According to Martinez, his work consists of various content: “I am unable to constrict myself to any one particular subject. My overall goal is to share my ideas with the the viewer creating some sort of reaction, whether it may be good or bad. I most enjoy the process of the work being created, seeing it come along seems to be what keeps me going. There are hardly if any deep rooted meanings behind my work. I want the viewers to take whatever it is that they would like and decide for themselves.”

Martinez describes that the creative process involved in the development of the show is the inspiration for the title. Taking some oil paint, he carefully created images of celebrity like figures. Whether it was Boba Fett, Willy Wonka or Rick James, Martinez brought them to life on the inside cover of the matchbook. Following an organic and intuitive process, Martinez is combining figurative realistic painting elements with geometric design in some of his works. Others are more informed by the balance between creation and destruction. He says, “We always seem to destroy things around us… [while] striving for things to be perfect.”