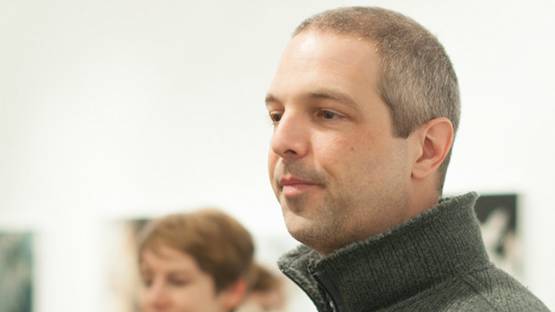 Josh George is an American artist known for his realistic work, created in oil and acrylic on wood panel, with incorporated layers of collage elements.

George was born in Kansas City. He is a graduate of the Kansas City Art Institute (The Illustration Academy) and he received his BFA at Central Missouri State University.

George uses acrylic and oil paint, and he usually applies it with brush and palette knife on panel, wall paper, maps, paper labels, and stamps, all collected in New York and Milan. He begins his work by drawing, collaging, and finally painting His subjects include human and cityscapes together in scenes of everyday urban life.
George uses himself and his wife as models for many of his figures which are all engaged in static acts of everyday locality. They either drink coffee, smoke or even just stare at some object, a beer for example. As the artist claims, he has always been attracted to the urban landscape and Inspired by everyday scenes, rituals or situations that are actually completely filled with personal interaction.

Josh George finds his inspiration in XVI and XVII century Italian masters Gian Lorenzo Bernini and Annibale Carracci. He has been influenced also by such artist as Degas and Mary Cassat, and the Ash Can artists like George Bellows, John Sloan or Robert Henri, or Contemporary artists Richard Diabankorn and Wayne Thiebaud.

Josh George has been teaching at the Pratt Institute and Virginia Commonwealth University’s Department of Communication Arts. He has been a guest lecturer for Syracuse University’s MFA in Painting Program, The Illustration Academy, and Accademia di’Arte di Brescia in Brescia, Italy.