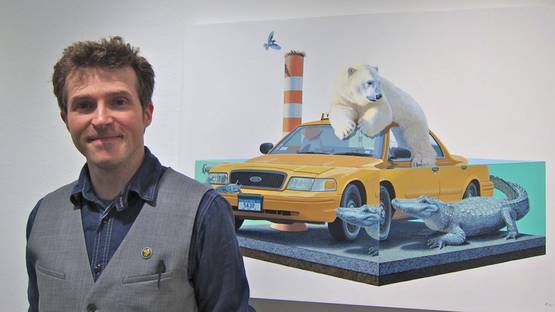 The relationship between man and nature has been a subject of various artists, yet in the work of Josh Keyes it becomes somehow differently processed. The artist carefully de-contextualizes the common and idealistic scientific illustrations of the natural world by detaching them from time and space and making them real. This particular undertake is based on some form of ecological agenda since the compositions reflect Keyes’s concern for the Earth’s future. As a matter of fact, the works can be perceived as a cynical and engaged comment on the current neglecting of nature’s welfare.

The intangible Relation of Nature and Art

Josh Keyes was born in 1969, in Tacoma, Washington. He was raised surrounded by forest and witnessed gradual their destroying by the grasp of industry, so it is no wonder that the environmentalist ideas grew on him. Keyes starts his career soon after graduation in 1992 at The School of the Art Institute of Chicago and couple of years later at Yale University School of Art where he collected MFA in Painting and Printmaking. During the course of time, the work of Keyes’s has been exhibited in gallery spaces in San Francisco, Los Angeles, and New York and published in New American Painters.

Sureal, yet almost realistic compositions of our present or near future

Although, Keyes’s works are critical, they are infused with the sincere admiration to our planet. The strange and sometimes funny, these paintings are produced as an effect of careful observation. It seems that the artist tries to articulate the system and the complexity behind but not to beautify it. By depicting animals in various states Keyes is eager to suggest a debate in order to problematize rather an intense relationship between biological and human world. The awareness of nature being fully disposable to and exploited by the humans is undermined in rather a blatant manner and that layer transfers the whole opus from just art to activist practice since it is philosophically driven cogitation inseparable from the political, economic and social changes.[1]

The dystopian and fantastic narratives of Josh Keyes are realized in hyper-realistic manner and they represent some kind of hybrids in regards to the references from both art history and kitschy animal illustrations. That is an effect of his fascination with photorealist paintings and science fiction and suggests the continuum of artist’s desire to depart from reality and create some other world, which in the case of his art is somehow a mix of reality and illusion. With lots of ironies, he conducted a social commentary, sending us practically a warning of the present state.

The world without humans

As the time passed by, surreal compositions of Josh Keyes became part of various private collections and there is a growing interest in his work. Although naïve in the painterly sense these compositions are the product of precise and structured art practice rooted in carefully thought agenda of raising awareness in regards to the alarming not climate changes, yet social and political mechanisms that affect the threaten the existence of our planet and all living beings that are inhabiting it.

Featured image: Josh Keyes in front of his work - image via Worley Gig
All other images courtesy of the artist