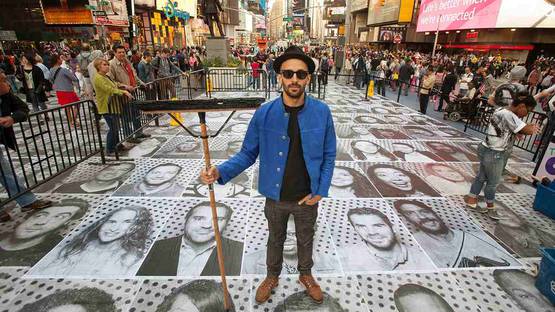 Perhaps one of the most important purposes that art may be used towards is bringing people together and increasing awareness of those that share this world with us. Trying to accomplish exactly that with his artistic practice, the French artist going by his initials of JR uses the biggest museum in the world to carry his ideas across - the streets of the cities across the globe. Merging together photography and street art, his publicly displayed works charged with emotion and heavy social issues are heralds of change in the reality formed by preconceptions built by advertising and the media.

JR’s artistic involvement started out with graffiti, as he adored the movement and its realization even as a boy. Born in 1983, JR would graffiti tag the street walls and subway passages of Paris during his teen days using the moniker Face 3. It wasn’t until he found a camera on the subway that he turned to photography, as it completely changed his perception of the known practice of street art. More than just creating graffiti of his own, he was able to capture the work he has made as well as pieces produced by other fellow artists, tracking the individuals and communication produced through this display. It would prove to leave a mark on his entire further career, as he remains known for carrying messages between groups of people through his publicly displayed works.

Camera in hand, JR had developed his photographic skills until an event that would not only propel him in the eye of the world art scene but also further define his approach to visual expression. The riots that broke out in the suburbs (banlieues) of Paris in 2004 gave JR a chance to capture the faces of those involved, largely comprised of the immigrant population. The project consisted of posting these images in larger proportions throughout the city, humanizing an otherwise discriminated group of people by portraying emotion and character. The up-close photographs containing a background of many present social issues have become a signature mark for the artist, and he has emphasized the problems of equality, freedom, and identity in his work thus far.

Up-close photographs contain a background of many present social issues

Portrait of a Generation

After drawing attention with his initial project, JR kept walking the path of averting the public gaze towards some well known, yet overlooked social issues. Often using his camera with a 28mm wide-angle lens, JR’s subjects are photographed close and personal, utterly revealing the essence of their emotions - the pain, the happiness, the sorrow that we all felt at some point in our lives. By leaving nothing but the basic nature of people that we can all relate to, JR speaks a universal language that can be understood on a scale wider than the boundaries presented by region, nationality, religion, education or age. His large-scale works bring forth the essential elements of humanity that connect us but tend to be buried under the guise of social norms.

All of these traits have been present in his practice that consists of displaying the photographs blown up in proportions as part of street art. Crossing the boundary of legal actions in order to realize his work, his “public exhibitions” draw tensions and issues to the forefront. His 2006 Portrait of a Generation project consists of images of African immigrants after the riots in the suburbs of Paris; in 2007, JR pasted large images of cheerful Palestinians and Jews on the opposite sides of the bridge that separates them in a project titled Face 2 Face; the 2008 project Women are Heroes included images of communities’ women stricken by the effects of war, violence, and poverty. These, and other projects conducted by the artist, all stand as a representation of his ideas and ideology, and the will to change the reality we live in.

Constantly telling the stories of those that are invisible to the world, JR seeks to turn it inside out through art and its possibilities. Employing street art and photography in his practice, he uses the biggest gallery in the world - the streets - to further his goal. Often crossing the line of the law, the artist displays on the streets of Middle East, the walls in slums of Paris, bridges of Africa and favelas of Brazil, pulling a thread between his subjects, the art as a medium, and those observing it. Much like in his days as a teen, JR claims his works to be a form of tagging - pasting faces of personas onto the walls hoping for a change. By putting his practice in-between the two sides, the project he took upon himself carries over to those that are now aware of it.