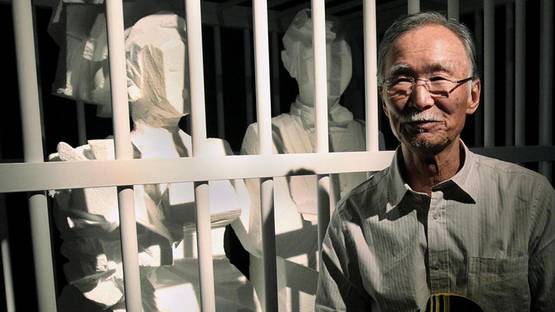 Ju Ming is a Taiwanese sculptor who attained fame in Taiwan in the 1970's, and in New York in 1983. Ming was trained as a woodcarver, apprenticed to Lee Chin-chuan as a teenager. He developed his skill and applied it to a range of media, including bronze, styrofoam, ceramics, and stainless steel.

Ming was born in Maioli, Taiwan, where he studied as an apprentice under Master Chin-Chuan Lee, the Buddhist statuary craftsman, working on restorations of the Mazu temple. Ju won several awards and prizes working in the traditional Taiwanese folk art style at the Taiwan Provincial Art Exhibitions in 1966 and 1967. Shortly thereafter, he began studying under the tutelage of Taiwan’s most eminent Modernist sculptor Yuyu Yang (1926-1997). With his new mentor, Ju began working on large-scale Abstract works and exploring new materials such as copper, iron, stone, stainless steel, sponge, and ceramic. Thanks to Yuyu’s support, Ming inaugurated his first solo exhibition at the National Museum of History in Taipei, Taiwan in 1976, which was a huge success.

Through the sculptural set which symbolizes the ideas of “imprisoning others, being imprisoned by others, and self-imprisonment”, the artists demonstrates that the subtle distinction between freedom and limit are in fact controlled by one’s thoughts of prisoning. The cage of the sculptures is locked from the inside with the key inside the lock. The figures inside the cage eventually could have freed themselves. The scenario shows that people are in fact self-imposed to be locked. Though life are more complicated and interconnected and cannot be simply defined to binary choices; the artist just tries to point out that lock or unlock, freedom or limit, good or evil are actually done by human’s own choices.

Ju received various awards and recognitions for his talent. In 1977, the Tokyo Central Art Museum in Japan hosted Ju’s first international exhibition. Ju’s most famous body of work, the Taichi series, is inspired by his personal practice of Taichi boxing. In 2007, Ju was awarded the 18th Fukuoka Asian Culture Prize, following a long list of honors. A few of the institutions in which the artist has exhibited include the Hong Kong Arts Center, the Taipei Fine Arts Museum, and the Musée d'Art Contemporain in Paris. The artist’s work is permanently on view at The Ju Ming Museum in Chinshan in Taiwan, which houses many of his monumental sculptures.