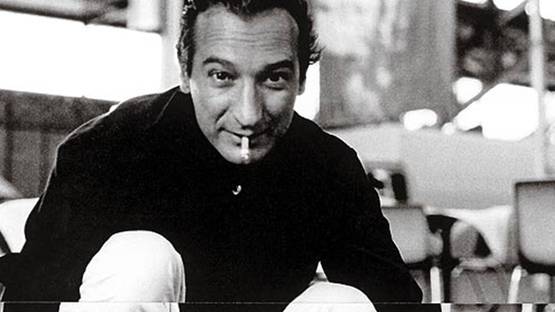 Juan Muñoz was a Spanish sculptor, working primarily in paper maché, resin and bronze. He was also interested in the auditory arts and created compositions for the radio. He was a self-described "storyteller". Muñoz is celebrated for his innovative combination of sculpture and installation art, in works that place figures in a specific architectural setting in order to blur the line between reality and artifice.

Born in Madrid, Muñoz studied art at the University of Madrid, the Croyden College of Design and Technology in London, and at Pratt Graphic Center in New York. He began gaining recognition for his sculptures in the 1970’s, first depicting dwarves and mannequins, and later expanding his production to include ballerinas and animated figures in conversation, often mounted on block-shaped bases that give them a sense of inanimate repose. Muñoz worked in several media, creating multimedia installations to accompany his visual works in some exhibitions, and obscuring the boundaries between sculpture, painting, installation, and performance. In his series of Conversation Piece works, he incorporates the human figure into his public installations, evoking specific scenes, sites, and interactions in ambiguous scenes left to the viewer’s interpretation. He frequently draws upon source material—ranging from literature, music, and theater, to canonical art history—enhancing the multimedia aspects of his practice.

He died unexpectedly from a stomach hemorrhage in 2001, at just 48 years old. His work has been exhibited at the Venice Biennale, the Dia Foundation in New York, Documenta in Kassel, and at the Institute of Contemporary Arts in London. He created many public installations on commission during his lifetime, and was awarded Spain’s Premio Nacional de Artes Plásticas Prize in 2000.