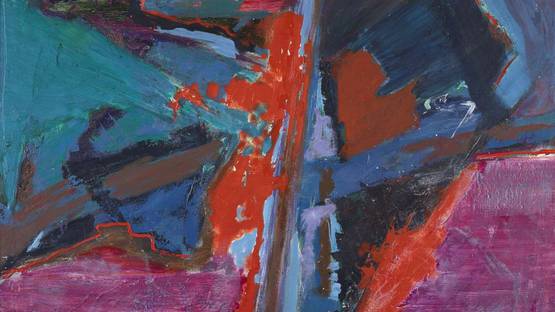 An American abstract painter, Judith Godwin uses the gestural methods and expressive color of Abstract expressionism to convey her responses to life and nature. Her work is influenced by environmental causes, gardening, modern dance and Zen.

Born in Suffolk, Virginia, Godwin was inspired and encouraged to pursue painting by her father, who was interested in architecture and landscape gardening. She attended Mary Baldwin College and continued her studies on Richmond Professional Institute, now Virginia Commonwealth University, and later Art Students League of New York. She also attended the Hans Hoffmann School of Fine Arts, where she met Jackson Pollock, Franz Kline, Willem de Kooning and Marcel Duchamp.

She once explained that painting “is an act of freedom and a realization that images generated by the female experience can be a powerful and creative expression for all humanity.” Her early works were characterized by sweeping, broad gestures, arcs and geometrics reminiscent of dance moves. During the 1950s and early 1960s, her palette was much more subdued and darker and limited in its range of color. Over the course of her career, her color palette has evolved, first softening and more recently becoming bright again.