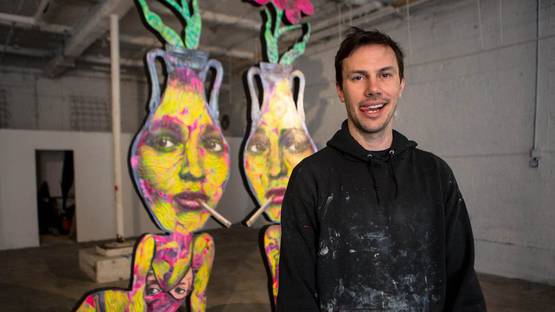 Judith Supine is an American street, fine, and installation artist who has been active on the streets of New York since the mid-2000s. Supine captured people’s attention with his wheat-pastes and large-scale public interventions in the streets of Brooklyn. Most notably, Supine engaged in a free-climbing endeavor on one of the thirty-one story buildings of the city to hang-up one of his signature collage subjects above the Manhattan Bridge. He succeeded and wasn’t apprehended by the police for this dangerous performance.

Born in Portsmouth, a city located in the U.S. commonwealth of Virginia, the artist uses his mother’s name as a pseudonym to keep his identity anonymous. His immersing into art came as the result for his lack of speech until he turned seventeen. Judith's parents pressured him into making art as a means of communication - his mother taught him to draw and to paint as an alternative way to express his emotions or thoughts to his family and people around him.

Art Made of Old Books and Magazines

His work was on view in many galleries throughout the United States and beyond including Jonathan LeVine Gallery and English Kills Art Gallery in New York, and Circle Culture Gallery in Berlin, Germany. His solo show Golden Child was on display at Mecka Gallery in March 2014. Additionaly, Supine's work was included in group exhibition Fresh Brew at Stephanie Chefas Projects in Portland. The show was on view at the Oregon gallery through the end of November 2015.

Judith Supine is currently based in Brooklyn.

Featured image: Judith Supine - artist in front of his works - photo by Aymann Ismail - ANIMAL NewYork
All artwork images courtesy of the artist