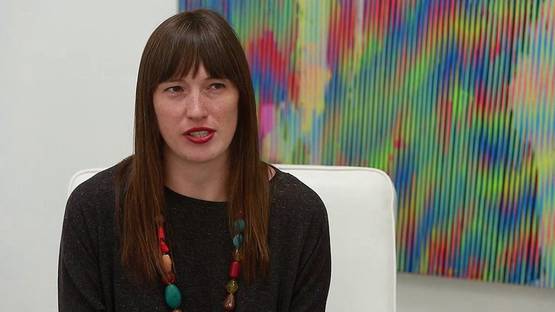 Oppermann was born in San Francisco, California in 1982. She received her BFA from The Cooper Union, and a Master's in Neuroscience from the University of California, Berkeley. In 2012 she completed a residency at FAAP in São Paulo, an academic exchange with Professor Robert Lucander at the Berlin University of the Arts, and completed her M.F.A. at Hunter College.

Drawing from her background in Neuroscience, interest in perception and cognition, and study in Color Theory, her brightly colored, scintillating paintings recall the psychedelic, while maintaining a strong conceptual rigor. Oppermann’s systematic and rule-based process is matched by her impulsive and intuitive approach, resulting in uncanny, often unsettling decisions that set up compelling tensions within the work.

Julie Oppermann’s series of paintings explore the contemporary idea of interference in relation to how information is disseminated, transmitted, and ultimately perceived, using painted moiré patterns created by overlapping multiple layers of nearly identical line patterns. Her work pushes the limits of visual perception, making paintings that are physically difficult to perceive. The scintillating effects arising through the calculated layering and juxtaposition of contrasting colors through repetitive line patterns elicit shuttering afterimages, optical flicker, and disorienting sensations of movement. Oppermann’s works range from very large paintings on canvas to medium sized works on aluminum and monoprints on paper highlighting her investigation of materials within her particular process.

The paintings use complex rules and systems of line, color, edge and pattern to create perceptual abstractions with scintillating color that evoke hyper-perceptual states. However, they simultaneously break many of the rules they set forth, and through this noise and interference they become something different. The paint texture, marks and subtle variations in color, and bleeds/drips/rips of paint similarly create their own interference, breaking the illusion of depth and space within the pattern, and bringing the eye back to the surface of the paint, the ‘skin’ covering the flat canvas.

Oppermann’s work was featured at solo exhibitions at Mark Moore Gallery in Los Angeles, and Galeria Árnes y Roepke in Madrid. Her work is included in numerous public and private collections, including the Museum of Fine Arts Houston, Texas, and the Museum of Contemporary Art, San Diego, California.

Julie Oppermann lives and works between New York and Berlin.