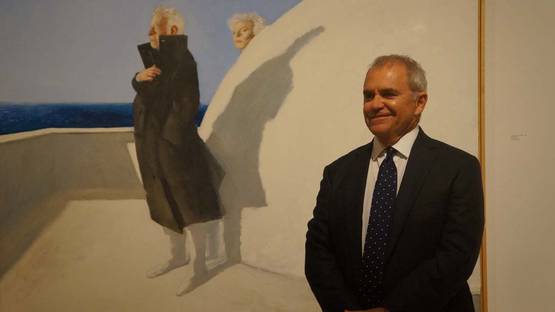 A Cuban-born painter, sculptor, printmaker, and caricaturist, Julio César Ernesto Fernandez Larraz is known for his mastery of realism. His work is characterized by a precise and detailed technique, his imagination, and his subtle touch

Born in 1944 in Havana, Cuba, Larraz is the son of a newspaper editor and began drawing at a very early age. In 1961, his family fled the country for Miami, Florida, later moving to Washington, D.C., and then to New York City. In the United States, he began draw political caricatures that were published by the New York Times, the Washington Post, the Chicago Tribune and Vogue magazine, among others. In 1967, he moved his focus to painting, crediting artists such as Burt Silverman, for teaching him different painting techniques. In 1971, he had his first solo show in the Pyramid Gallery in Washington, DC.& He now lives with his family in Miami Florida after living in Florence Italy for three years.

Inspired by Surrealism and Giorgio de Chirico in particular, Larraz created realistic depictions of everyday life in the Caribbean, featuring Cuban cultural imagery such as bull fights, white linen suits, and maritime scenes. He often includes a range of biographical clues, making an allegory out of his life.