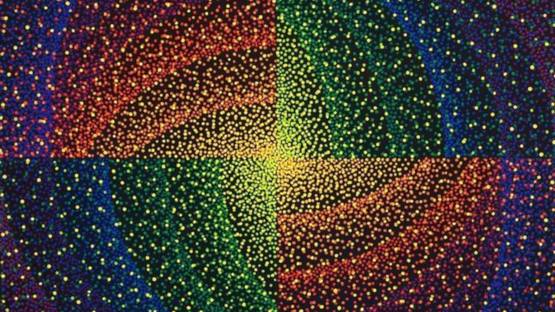 Julio Le Parc is an Argentinian op and kinetic artist, known for his perceptually illusory paintings, sculptures, and installations. A significant figure in Argentinean modern art, he is a founding member of Groupe de Recherche d’Art Visual - GRAV.

Le Parc was born in 1928 in Mendoza, Argentina, into a family of limited economic means. After moving with his mother to Buenos Aires, he attended the School of Fine Arts and showed growing interest in artistic avant-garde movement in Argentina. It is here that he formed GRAV, along with fellow artists Hugo Demarco, F. García Miranda, Francisco Sobrino, Horacio García Rossi, Molnar, François Morellet, Sergio Mǫyano Servanes, Jean-Pierre Yvaral, and Jöel Stein. In 1966, he received the Grand Prize for Painting at the 33rd Venice Biennale.

Positing a utopian vision for art and society through his perceptually illusory paintings, sculptures, and immersive installations, Le Parc described his practice as “disturbances in the artistic system.” Working to break down the boundaries between art and the viewer through color, line, light, shadow, and movement, he wanted to "seek, together with the public, various means of fighting off passivity, dependency or ideological conditioning, by developing reflective, comparative, analytical, creative or active capacities.”