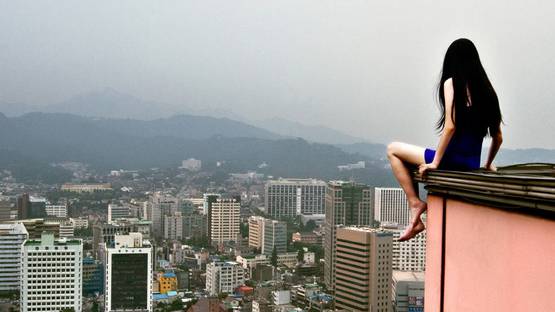 Jun Ahn is a South Korean photographer known for subverting fear into audacity with her death-defying and vertigo induced self-portraits created on the verges of skyscrapers. Her series of images entitled Self-Portrait is her most prominent project to date, which she noted as a coming of age work – an intimate performance without an audience[1], that marks the end of youth and coming to terms with her own future as well as the future of the vast cites upon she reflects and creates her art.

Coming of Age and Education

She graduated art history at the University of Southern California in 2006 after which she enrolled in postgraduate studies at the Pratt Institute. The years 2009 and 2010 were important for her breakthrough because she was awarded a scholarship at Parsons’s The New School for Design in New York and had some of her first major exhibitions, one of the most important being a group exhibition with Kazuna Taguchi at PS 122 in New York. After getting her Master of Fine Arts diploma with honors, Juhn Ahn started a Ph.D. program at Hongik University. Her portfolio to date consists of following projects: Self-portrait series, Float, Invisible Seascape, and The Tempest.

The Daring Self-portrait Series at the Skyscraper Edges

The majority of these acrophobic pictures are from New York, Seoul, and Hong Kong and the majority of them will fill you with unease, but yet intense beauty – fragile and ethereal. The pictures, because of their tragic potential, make us wonder if the accident really might have happened just a second after the shoot. The pale girl in a peacock-blue dress in some moments seems like a contemporary guardian angel from the metropolis rooftops, free from the rules of gravity. The photographs are not highlighting the fearlessness behind the shooting or challenging death. It is rather about confronting the fear and capturing the beauty of it. Ahn exposes her methods: It's the very short moment that cannot be perceived by the naked eye. I normally get a thousand pictures. It's almost like a video of slow and boring movement. It shows clearly I am in the fear, but one or two photos really subvert the context and show like I am peaceful or aggressive.[2]

They depict a moment of monumental strength, in which all the gentle and delicate beauty is frozen in time

Other Projects: Float, Invisible Seascape and The Tempest

The rest of her projects all have a resemblance and are quite different from the Self-portraits, except in one quality – they depict a moment of monumental strength, in which all the gentle and delicate beauty is frozen in time – whether it are waves splashing in the tempest, roaring of the sea or particles of floating and blasted rocks.
The artist is represented by Christophe Guye Galerie, Zürich.