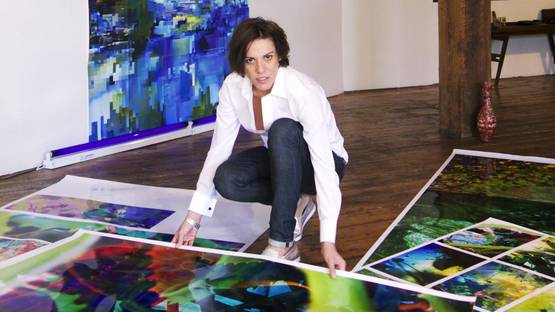 Water, the element that builds up the life, has been a source of great inspiration for numerous creatives over centuries. Oceans, lakes, rivers, waterfalls, water parks and wet rainy roads have always been interesting subjects for painters, photographers, and even sculptors. Fascinated by sunlight dancing on the undulating surface of swimming pool water, Brooklyn-based French artist Karine Laval has spent a large part of her career creating amazing shimmering pool scapes. Sophisticated and seductive, her work creates a bridge between real and imaginary, between ordinary reality and a more surreal and dreamlike universe.

Born in 1971 in Meudon-La-Foret, the southwestern suburbs of Paris, Karine Laval obtained her degree in communication and Information from the CELSA (University of La Sorbonne Paris IV) in 1992 , and in journalism from the University of ASSAS, one year later. In 1997, she relocated to New York City where she completed her education with photography and design courses at the Cooper Union, SVA and the New School of New York. Today, Laval is widely known for combining environmental and architectural photography with portraiture, often inspired by her travels to Cuba, Argentina, Norway and France where she spent a plenty of time between 2002 and 2006.

The Art of Karine Laval

Often compared with such names as William Eggleston and Henri Cartier-Bresson for her use of color to express mood and her pursuit of spontaneity, she explores how far she can push her chosen medium. Working in photography and video, Laval creates bright, positive, and sometimes nostalgic works that remind viewers that beauty can be found in the most mundane. She explores notions of space, memory, the human figure, and our relationship with the environment, with a particular focus on water and swimming pools, which are representative of our culture and lifestyle. She has been attracted to the architectural aspect of the pools, which combine the natural with the artificial in a manmade environment.

Laval’s recent work stays true to her chosen subject matter, but move further toward distortion, with a strong and vibrant sense of movement and dramatic lighting and coloring. The results are ethereal and painterly, and often nearly abstract. Her photographs were featured in many magazines, including Elle, The New Yorker, and the New York Times Magazine. Her work has been widely exhibited in individual and collective shows throughout the US, and internationally at such venues as the Palm Springs Art Museum, Bonni Benrubi Gallery, New York, Sorlandet Art Museum, Kristiansand, Norway, and the Palais de Tokyo in Paris, among others.