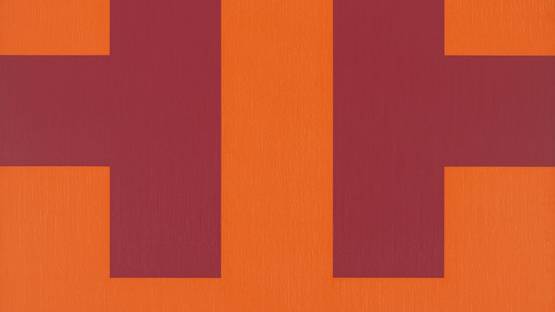 Karl Stanley Benjamin was an American painter who came to prominence in the 1950s as a member of Abstract Classicists. He explored color through hard-edge abstract works.

Born in Chicago in 1925, he enrolled at Northwestern University in 1943, but had to drop out to join the U.S. Navy during World War II. After serving in the Navy and then graduating English literature, history and philosophy from the University of Redlands, Benjamin began his career as a middle school teacher in California. After starting a family, he moved to Claremont in 1952, and subsequently taught in Chino for the next 30 years. Just before his relocation, he began “playing” with paint in 1951, and soon decided to pursue this career path. In 1954, he had his first solo show, at the Pasadena Art Museum and, in 1959, he was included in the Los Angeles County Museum of Art’s ground-breaking exhibition Four Abstract Classicists:  Karl Benjamin, Lorser Feitelson, Frederick Hammersley and John McLaughlin. After this show, Benjamin’s meticulously orchestrated color and form was described as Hard Edge Painting.

Throughout his career, Benjamin created a highly acclaimed body of work that celebrates the glories of color in all its variations. His dazzling geometric abstractions feature a rich vocabulary of colors and hard-edge shapes in masterful compositions of tightly balanced repose or high-spirited energy.