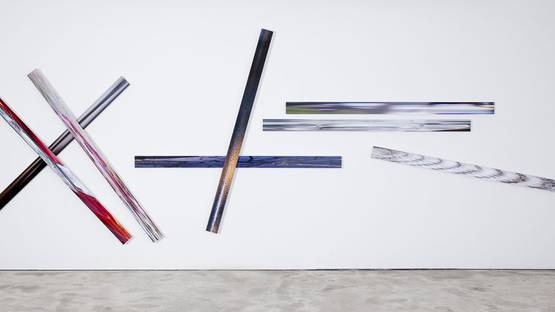 Kate Steciw is an American contemporary artist who uses sculpture, photography, video, and image manipulation in her artwork. Interested in the relationship between imaging and image consumption, Steciw explores the production and distribution of photography and how images stimulate human memory and desire.

Kate Steciw was born Bethlehem, Pennsylvania, in 1978. She gained a BA in Sociology from Smith College in Northampton, Massachusetts, and an MFA with a major in Photography from the School of the Art Institute of Chicago. For 10 years she worked a day-job as an image retoucher at Art + Commerce and made pieces in her spare time.

Kate Steciw’s sculptures, video installations, and photographs have been associated with the post-internet movement and are inspired by events in popular culture. With 10 years of experience in image retouching, Steciw articulates and abstracts images to transgress their typical ideological associations. She often manipulates stock images of objects into digital photographic collages, removing them from their commercial context and reinterpreting the images as art objects. They interrogate the relationship between reality and virtual representation, splicing together a disparate group of objects that mirror how internet is consumed. The images, taken out of their commercial context, are reimagined as contemporary abstract mosaics. Other work by the artist incorporate mixed-media materials, such as glass beads, stickers, car ornaments, and bandages.

She has exhibited extensively in New York, in solo and group shows at galleries including Toomer Labzda, Higher Pictures, Horton Gallery, BAMart, Stadium and foxy production. Steciw's first solo exhibition, Love My Way, was held at the Primary Photographic Gallery in New York City in 2011, while her first solo exhibition outside of the United States, called Live, Laugh, Love, was took place in London and was held at The Composing Rooms in 2012. She has presented her works in Naples, Italy, Brussels, Belgium, Los Angeles, CA, and Berlin, Germany, among others. Steciw's ouvre has been featured in publications such as Interview Magazine, Art Forum, The New Yorker and Art in America. Her first book, The Strangeness of This Idea was published by Hassla in June 2010.