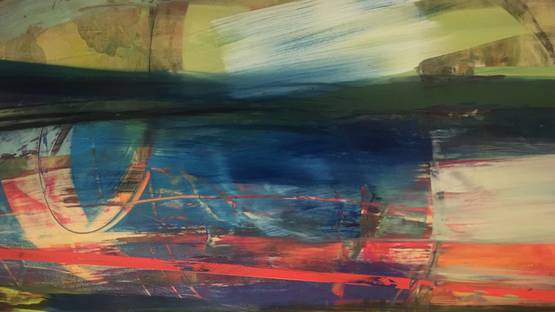 Katheryn Holt is an American painter whose abstract and figurative paintings and drawing tell stories of passing time and history. Her recent abstract works are dedicated to half-remembered landscapes and she uses paints, fabrics and silk-screened images derived from old family photos and Victorian book illustrations. Her rich, multi-layered mixed media works also contain texts from vintage magazines, various advertisements and posters  as well as dialogues from the television scripts her father wrote back the 60s and 70s.  Even though Holt’s art has a lot of personal references, it also possesses the power to remind us of our public, collective history.

Holt has grown up in Hollywood with a film writer father and a homemaker mother. She was strongly exposed to the narratives present in the media of the 60s and 70s and the women she depicts in her figurative works are inspired by the leading female characters popular at that time. Another interesting detail is that Holt’s grandmother was a seamstress for the Hollywood stars and young Holt was often surrounded by vintage costumes and a large variety of materials and textures, such as polka dots, lace, gingham and bathing suits. Holt’s interest in textures is evident in her works, which are extremely rich and layered. Her art brings together and unites a lot of different media, such as silk screen, collage, pastel, and graphite, in order to create a sense of motion and a chaos of abstraction.

Holt's art unites a lot of different media, such as silk screen, collage, pastel, and graphite, in order to create a sense of motion and a chaos of abstraction

In her new abstract series, Holt depicts the concept of memory preservation and loss. This means that her memories give the basic structure to her pieces along with the freedom of emotional self-expression. Holt is depicting both interior and exterior realities - the Interiors series represents small houses and their surrounding landscapes, which the artist painted in pastel colors, typical for California home decor in the 1950s. On the other hand, the Exteriors series features abstract fields of dark or saturated colors combined with the pieces of silk-screened TV dialogues that Holt’s father wrote in the 1970s. The text present in Holt’s paintings has a role of introducing the psychological tension between the artist herself and her family history and struggles depicted on her canvases.

In her new abstract series, Holt depicts the concept of memory preservation and loss

Holt’s paintings and drawings depict an uncharted, hazy territory between her private memories and public, collective history. Her personal experiences and growing up surrounded by the media of the 60s and 70s are very important influences when it comes to her art. Holt is playfully mixing her own memories with the world and characters she has seen on the silver screen while she was still a little girl. Nowadays, Holt is an active artist whose artworks have been shown in numerous solo and group shows in New York, Germany, Texas, Georgia, Colorado, and California.

Featured image: Katheryn Holt - Jumping Through Hoops
All images courtesy of the artist.