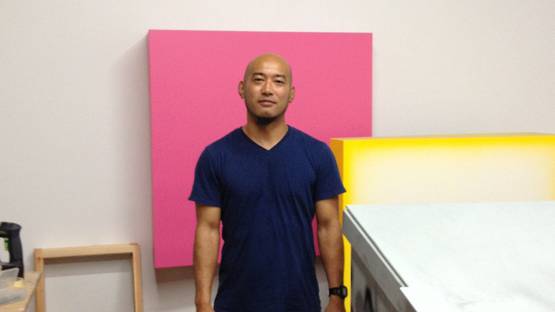 The Japanese artist Kaz Oshiro combines sculpture and painting in his practice, while considering his work as dissociated from both disciplines. Instead he describes his practice as “postmodern photography”, creating provocative instances of perception which simultaneously confuse and expose artifice and reality.

Born 1967 in Okinawa, Oshiro today lives and works in Los Angeles. He emigrated to the United States in 1986, where he studied at California State University, Los Angeles, graduating with a BA and an MFA. His work has been exhibited at museums and galleries such as Apex Art, the Swiss Institute and the Asia Society and Museum in New York, the Cincinnati Contemporary Arts Center, the Orange County Museum of Art, UCLA Hammer Museum in Los Angeles, the Royal Academy in London, and Veletrzni Palace in Prague.

Using stretcher bars, canvas, and paint, Oshiro makes uncannily realistic objects with a humble simplicity—a full-size replica of a garbage dumpster, kitchen cabinets, washing machines or a column of wood-paneled Sony bookshelf speakers. Merging abstraction, conceptualism, and representation, he creates three-dimensional hyperrealistic paintings that appear like readymade objects or sculptures from the front, but the backside—which Oshiro intentionally leaves to be visible—reveals itself as an assemblage of canvases. Each of his works is created from stretched canvas, expertly faux finished and adorned with real fixtures such as handles and decals.