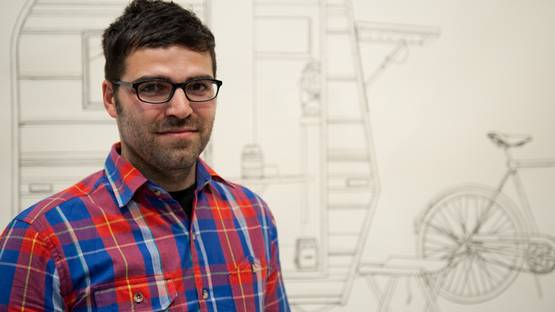 Kevin Cyr was born in 1976 in Edmundston, New Brunswick, Canada and grew up in Madawaska, Maine. In 2000, he received a BFA from Massachusetts College of Art in Boston. Cyr is currently based in New York. His paintings, drawings, sculptures and installations have been exhibited by galleries and museums, internationally.

Cyr's work is included in the permanent collections of La Fondation d’Art Oxylane in Lille, France and the West Collection in Oaks, Pennsylvania. Cyr’s work has been featured in publications such as Desillusion Magazine, Juxtapoz Magazine, Huffington Post and The New York Times.

Kevin Cyr’s paintings result from the artist’s ongoing fascination with the vehicles he frequently saw in his childhood. “I have always been interested in painting vehicles and scenes that have defined the evolution of the American landscape,” he explains. The subjects of his paintings have included commercial vehicles, RVs, vans, camper bicycles, and camper karts, all in a state of disrepair and marked by graffiti and rust.

Cyr puts his vehicles on solid, brightly colored backgrounds, which he likens to a set-up for portraiture. Cyr also makes die-cast miniature models of these cars, taking care to include the details of their worn exteriors. Common themes introduced in his work include mobility, sustainability, mortality, and consumer culture