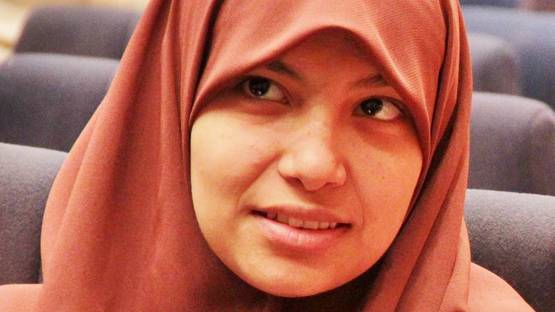 Khadiga Tarek, known as Khadiga El-Ghawas, is an Egyptian graffiti artist who became the First Light Calligrapher in Egypt and the first woman in the world to be mastering this art along with 6 men from different countries around the world.

Khadiga was born in 1992 and grew up in Alexandria, Egypt. She is a Dental student at the Faculty of Dentistry in Pharos University Alexandria, and also a volunteer Calligrapher in Bibliotheca Alexandrina‘s Calligraphy Center.

From the age of 8 till the age of 12, when her talent started to emerge, she won many drawing prizes and awards in her country. At the age of 13 her calligraphy talent began to appear during her school days and was observed by her calligraphy teacher Mr. Shibl as he was the one who taught Khadiga the basics of calligraphy and made her participate in Schools Calligraphy Competitions.

In 2011, Khadiga won the first place in an important Contemporary Calligraphy Competition  in the Bibliotheca Alexandrina’s  calligraphy center called “ Revolution in Arabic Calligraphy Eyes “ and that’s when everybody began to recognize her true talent. After that she went to a calligraphy school to complete her calligraphy studies.

“When I am dealing with calligraphy and its designs I put every piece of my passion and experience for this kind of art in it starting from the first set of the whole shape to the big and fine details, colors, movements. Every piece of me is put in it. Making a good, comfort, cheerful calligraphy piece is my mission. Calligraphy is my soul, it enriches me and makes me full of life”.

In April 2013 she began her Light Calligraphy work inspired by Julian Breton‘s Light Calligraphy, and she started to make her own version of this art. “I started designing the shape of the letters and sentences that I was going to write with light. I did my own designs based on my Calligraphy studying experience and some of my observed contemporary calligraphy. For me light calligraphy is much beyond any ordinary calligraphy act… It is a combination of meditation and old calligraphy secrets plus an intense physical work. This art is similar to light painting but with different lights and techniques.”

The whole process starts with choosing the word that she is going to light then she calculates its energy field. And then she writes it with all the traditional Arabic calligraphy types after what she chooses what is suitable for it. The action starts by practicing the word physically with her whole body for about 20 minutes to absorb the whole process. Then it’s time to perform it in front of the camera with lights for 30 seconds or more if needed.

“The shooting happens at night, either on streets or in a studio, if it is not safe for me to be on streets alone because of the country’s situation, then I combine the calligraphy with the night shot.”

Khadiga had talent in sports since she was little, from gymnastics to horse riding, and when she grew up she started mastering ancient Chinese meditation and energy healing.

“Light calligraphy came to my life to combine everything together, it combined my physique with my calligraphy with my energy studies with everything. The all 7 of us have different techniques in writing, what makes my work special is that I write with traditional calligraphy rules along with a contemporary twist, not with full free style. I am trying to spread a good, powerful energy with its healing abilities through my art work, and I wish that the whole world will know about me and my art work one day.”