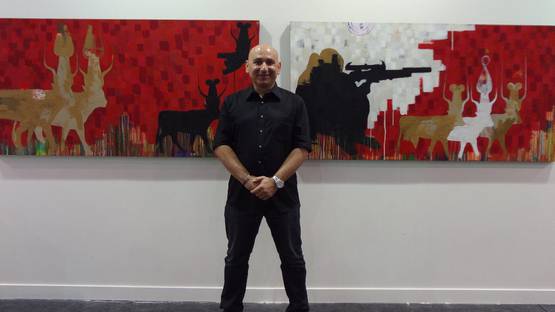 Stress caused by military confrontations, unexpected political landmarks, and the subsequent socioeconomic consequences can affect a person in various ways. Khaled Hafez is an Egyptian artist who grew up is a society that was reshaped according to continuous changes since the mid-seventies. In that process of change, the society lost some of its Oriental character, but at the same time, it acquired other traits, with globalization and consumerism being the most responsible for the new patterns of thinking and behavior. Many have lost their interest in exploring the issues such as authentic versus the contemporary, but also many artists, including Hafez, choose to tackle more challenging themes like the sacred versus the commercial.

Combining the Egyptian Symbols with the Western Icons

Identity is a dominant and recurring theme in his work, and he often uses multiple juxtapositions to explore a combination of multiple visual elements, rather than insert it in a unique reality. Hafez mediums of choice are installations, painting, collage, videos/films, where the ancient Egyptian symbols get combined with Western icons. The old paper is used in the collages, yellowed artificially by excessive solar exposure or naturally, representing the mummified past, icons are today’s present and the painted distorted figures are the artist’s proposal for the future. His painting, with its unique aesthetics, is recognizable by the imagery of the body perfection, where the choice of the image always reflects the perfection of body proportions, which is a criterion that was used in Mediterranean mythology. Hafez’s videos since 2001 have addressed consumer behavior, subjugations, political leadership, democracy, fundamentalism, and the sacred. The ironic approach was mutual for all of those themes, but he didn’t use it forcibly in a manner favorable by neither old nor the new regimes, as the artist simply didn’t care. It was just art.

The artist works in installations, collages, paintings and film-making

Between Medicine and Art

The use of western images was inspired by Hafez’s travels in his 20’s when he backpacked through several European countries. That was all before bio and techno-terrorism, Osama Bin Laden, September 11, the American invasion of Afghanistan and Iraq. He read about the West in history books and wanted to discover The West, the one that represented the free world. So the idea of juxtaposing the Western images with eastern images in his collages was born, where he continuously tried to create a visual language that was capable of representing ideas legible to both West and East. During the 80’s, Hafez studied medicine while pursuing evening classes in fine arts at the same time. In 1987, he received his medical degree, and his M.Sc. as a medical specialist in 1992. All the way through his medical training, he was exhibiting his pieces and creating new ones. Around 1995, he felt the need to make a decision regarding his future, so he stopped his medical practice and made a transition to pharmaceutical marketing. In 2005, he finally dedicated himself to studio work. Hafez earned an MFA in New Media and Digital Arts from Transart Institute in New York, and Danube University in Krems, Austria.

By July 2011, Hafez turned his back on all events and took all political elements out of his work because it was obvious to him that regressive forces and similar groups in Egypt were stealing the revolution. In a way, his painting is quite similar to his videos. He is neither an abstract painter nor a video artist because he likes to tell stories, and he considers himself a filmmaker rather than a video artist. Where video art is about trying to get the audience to feel, see or perceive, film-making makes a statement, and that perfectly corresponds to the artist’s needs and desires.