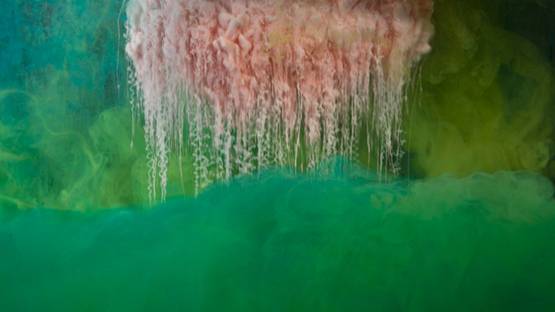 The American artist Kim Keever can be described as a modern-day hydroponic equivalent of Jackson Pollock - instead of a canvas, though, Keever drizzles paint into a 200-gallon fish tank, creating some great effects while doing so. When you first glance upon the works of this man, you may find yourself questioning which medium you are observing - Keever is actually a photographer and has mastered a technique completely his own that you will soon come to fully understand. Prepare to meet a man that had the dreams of improving booster engines for NASA's spaceships - and had all the skill in the world to back that ambition - but ultimately built his legacy through creating incredible pieces of visual art.

Kim Keever was born during the year of 1955. Guided by his father, he always aspired to be an inventive technician - with these goals in mind, Keever studied Engineering at Old Dominion University in Norfolk, VA. He was an outstanding student and was predicted to have a good future in the profession he chose for himself. During summers, Keever would intern at NASA (National Aeronautics and Space Administration), where he worked on missile skin technology and jet nozzles - yes, fields very far from what made him famous later in life. As a matter of fact, Kim had excellent grades and a work ethic very fitting with NASA, so naturally, the young man envisioned himself as a future key part of this organization. However, something changed inside Keever as he one day decided to quit the thermal engineer position and test himself as a full-time artist, primarily a painter. Keever started his career in the midst of The New York City of the 1970s, in a time that Andy Warhol was taking the world by storm and the emerging art of subway graffiti was at its arguably highest peak. Instead of simply joining some of the popular movements thriving in New York, Kim desired something more personal than that, something more individual and unique in character. As an overture that led to his photography, Keever spent nearly two decades as a traditional painter and printmaker until he discovered the style and subject that would become his trademark in the year of 1991. Being a huge fan of the landscape painting, especially the styles of Romanticism, the Hudson River School and Luminism, Kim turned to themes he both knew and loved. Although his vocation changed radically, he has always drawn on his original occupation by retaining a scientific and investigative process in his work, as you will soon come to see.

Keever's photos are both scientific and expressive, finding an incredible balance between the two

Artistic Development and the Landscape Phase

After a friend gave him a fish tank through a coincidental turn of events, Keever began constructing complex tableaux composed of model train props that were actually submerged in water and meticulously lit to create a hyperrealistic landscape and a beautiful sight. This was quite a turn from traditional oil painting and it proved to be a hand in glove fit with Keever who fell in love with the results. He started experimenting with different perspectives, lighting tricks and the optical properties of water, all in order to create photographs that looked like they were taken outdoors. At the peak of this series, the works of Keever looked a lot like the paintings of Caspar David Friedrich. Over time, his themes took a step towards more minimal, conceptual and expressionistic techniques, walking away from his already mastered landscape style. Soon, Kim started submerging plaster objects in the tank, tracking their decomposition with photographs every step of the way. Ultimately, these decisions led Kim Keever to full abstraction and complete lack of form. His latest work is stripped of all imagery and is purely focused on the diffusion of liquids and the interplay of color and light. Much of his work can be connected with Kim's childhood days in Virginia Beach, where the young artist would make dams in the tidal areas and observe the water’s behavior, how it reacted to sudden changes. Keever also spoke of how his father used to pour the condensed milk into a pitcher of water to demonstrate the principles of hydromechanics. Although he was learning about physics at the time, little did Keever know that this experience would become a vital part of his subconsciousness and reappear later in his life in a completely different form.

When Keever's landscape phase was at it's highest, his photos very much resembled the works of the legendary Caspar David Friedrich

As you have no doubt already concluded on your own, Kim Keever leaves much room to chance when creating his pieces - the artist himself delightfully explains the benefits of such an approach: I couldn’t create what randomness gives me. Furthermore, his staged scenery is characterized by a psychology of timelessness. Although Kim Keever is somewhat reluctant to fully reveal the process of his work, he has given clues about some basic stages - he adds Sears Easy Living paints and some other chemicals to the fish tank, after which he has approximately 15-20 minutes before the liquids diffuse, leaving the 200-gallons of murky brown water in their wake. During the exciting moments when the colors are battling and whirling, Keever shoots thousands of photos, ultimately choosing one or two images and disregarding all the rest. Of course, next is the dreadful process of cleaning the tank of all the colors so that the whole set could be prepared for a new session. Such a short time that Kim has at his disposal before all the paint becomes useless brings much tension to his work and also adds much deeper psychology placed behind his photos - of these circumstances his materials find themselves in, Keever states that they only need to hold up for that ephemeral moment, and then it doesn’t matter anymore. Even though his method is one hundred percent modern, Keever's technique is much closer to the Old Masters than you think - much of the contemporary art revolves around the term of anti-beauty, whilst Kim constantly seeks to incorporate as much grace in his work as humanly possible. Most of Keever's works are available at Kinz Tillou Fine Art.

Keever's abstract pieces play with concepts such as randomness and timelessness

A Lucky Break for the Art Community

Although Keever’s dabblings in aquatic abstract photography are miles away from his disciplined, rigid days of engineering, we can safely say that Kim has found his true calling. Do not get us wrong, we are not saying that Keever was not a good engineer or anything of the sort, but the sheer beauty and uniqueness of his work are beyond words and it would have been a real shame if the artist stuck to his original profession. The only problem we can find with his artwork is the harsh reality that the originals he makes can not be somehow preserved and shielded from the inevitable conclusion - this, however, does not bother Kim Keever too much, as he explains himself: I try not to be sentimental, that is the destroyer of beauty. With that sentence, we leave you to enjoy the pure grace of this artist's portfolio.