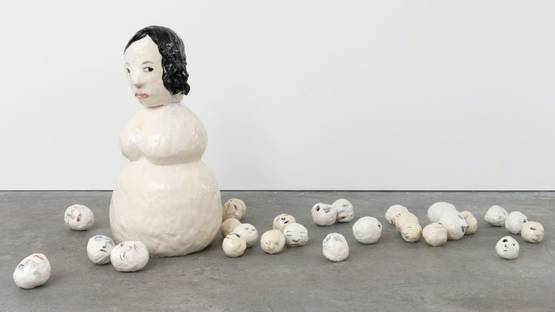 A sculptor from Prague, Czech Republic, Klara Kristalova works mostly in ceramics and relies on the Meissen porcelain technique. She also works with plaster, bronze, wood and ceramics to create small scale figures which often allude to ornamental objects. The odd yet familiar world she has created is populated by characters who are peculiar, alone, quiet, and perhaps lost.

Born in former Czechoslovakia in 1967, Kristalova moved to Sweden with her parents when she was only a year old. She studied at the Royal University College of Fine Art, Stockholm.

Kristalova draws inspiration from traditional myths, fairy tales and other literary sources such as Hans Christian Andersen, Selma Lagerlöf, Gösta Berling, old DC comics, and Oscar Wilde, adding her own twists. Creating sculptures of fantastic quality, who morph into flora, fauna, and other natural elements, the artist explores memory, trauma, and the lost territory of childhood. Kristalova's practice is rooted in the decorative and craft tradition of 18th-century Meissen porcelain figurines, which had a formative influence on the style and development of European porcelain sculptures. However, the artist adds her own touch by manipulating the glazes so that they often run and bleed into each other, becoming more painterly than sculpted. These pieces are often exhibited in old wooden cabinets, evoking 18th and 19th-century Wunderkammer or Cabinet of Curiosities.