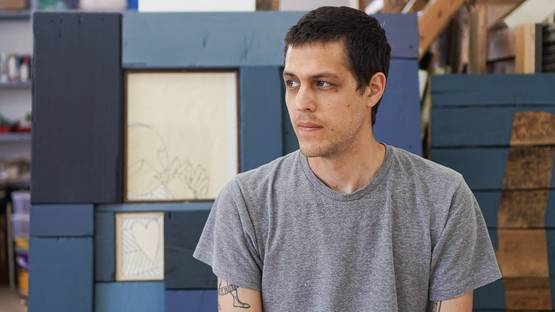 I hope to move heavy hearts at least one inch to the side by confessing that I'm petrified of and secretly in love with the world. This is a statement that serves as a fuel for the creative machine of Know Hope, a famous Israelian artist renowned for his narrative urban pieces, murals, assemblages and installations. His artworks have a distinct way of pulling the heart strings of the viewers as Addam Yekutieli tries to make emotions the focal point of every single piece he authors. It should be noted that Yekutieli is prone to presenting his pieces both on a street and within the gallery space - a decision he made in the year of 2004. Over the course of his career, Addam has developed a visual iconography and vocabulary he utilizes to reflect real-life situations and document the notions of a collective human struggle we face every day.

This artist was born in Los Angeles in 1986 and grew up in Tel Aviv, Israel. Over the past ten years, Addam Yekutieli has formed a unique visual iconography and vocabulary utilized to reflect real-life circumstances and observations, as well as document the notion of a joint struggle of the human kind. An instant give away that you are looking at one of his original pieces is identifying the characteristic puppet style that made him famous in the first place. Very logical when you consider where he creates, Israeli-Palestinian conflict plays a major topic within Addam's pieces - all the issues concerning the identity and borders commonly found in this struggle can be regularly found in his pieces. However, Yekutieli insists that he is not a pure political artist despite these theories[1]. By making distinct parallels between governmental conditions and emotional situations, it's obvious why some consider this artist's work as political. Due to his attempt to make a dialogue with the audience on a level based on emotional mechanism, Addam's output tends to be understood and participated in intuitively without relying on solely intellectual interpretation. As was said earlier, Yekutieli operates both on the street and inside a gallery. This rule enables him to make various pieces without limiting himself to one or two mediums. Yekutieli also enjoys combining ready-made materials, mixed media pieces, photographs and text within his artworks. However, putting the painting tools aside, he mainly loves composing his pieces by using detritus and building materials, including wood, bricks and weathered paper.

If you are in a position to witness his work first hand, Yekutieli's style will become instantly recognizable and you won't have any trouble identifying his pieces in the future

Planing the Projects for the Future

As for Addam Yekutieli's ongoing projects, there are a few that should really be noted at this point as they either are or will make a massive impact. Truth and Method is a project substantially based on realistic situations, continuing a well-established process of extensive observations of context whilst providing greater insight into a reflective practice. Images of planned site-specific street pieces form the basis of Truth and Method, with a series of emotional, text-based messages creating narratives reinforced by their circumstances. This vigorous and ongoing process invites us to understand our mutual reality through our own subjective personal experience and the photographs which are also planned expose us to moments from different environments, inviting us to try to find both personal and collective meaning in them. The project will hopefully stimulate feelings of belonging, solidarity and compassion. Vicariously Speaking is another existing new project the artist has in store for us. Since early 2016, the artist has been exchanging letters with imprisoned individuals currently serving sentences on death row in a Nashville state penitentiary. Following this correspondence, fragments of sentences from the inmates’ letters were extracted and put on a series of billboards around the city of Nashville. By taking these phrases out of their original context and placing them in a completely new one, thoughts of inmates take place in a public space and a dialogue within an interactive environment is created between two separate realities. In the future, these phrases will be tattooed onto people on the outside. Taking Sides is the last huge project the artist plans on executing at this point and is a bit less morbid than the Vicariously Speaking. Taking Sides aims to examine the idea of territory and the notion of adopting a stance, something all of us are familiar with. Generally, lines are drawn on the ground in order to mark two territories or express allegiance to certain ideals. These pieces, being placed in high-traffic public spaces allow an unavoidable interaction on behalf of the bypassers, with people constantly taking sides without even noticing, by simply walking down the sidewalk. The interventions are created in a specific manner, each responding to their environment and interacting with the people using the public space, allowing various images to be created in real time. These images will surely pack an emotional punch due to the deep meanings behind the written statements.

Due to his unique style, it comes as no surprise that this artist has worked and exhibited in many countries around the world. He created and presented pieces in Norway, Israel, Croatia, Gambia, South Africa, the United Kingdom and the United States. And in all of those countries, Yekutieli managed to do what he strived for - to make the detachment between the emotional and political non-existent. This way, Addam Yekutieli allows the viewers to see themselves placed in the larger context than their own and realizing some long-ignored dark truths of our society.

This artist are represented by Lazarides London, Die Kunstagentin and Galerie Openspace.