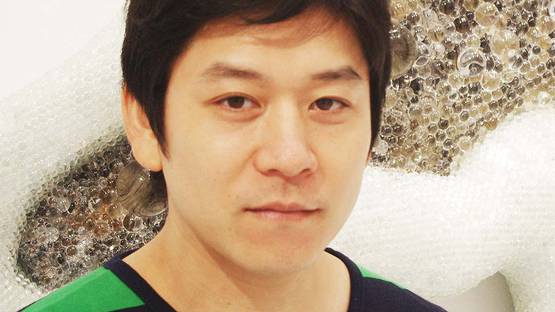 Nawa was born in 1975, in Osaka. Kohei Nawa received his BFA, MFA, and Ph.d. in Fine Arts from the Kyoto City University of Art. He is currently the Assistant Professor in Department of Fine Art at Kyoto University, and the director of the platform SANDWISH, a production house for art, design and architecture.

Kohei Nawa is acclaimed for his PixCell series, which is a word that integrates ‘pixel’, which demonstrates digital image resolution, and the biological ‘cell’. While the subject in each work connotes its own attributes such as weight, smell and color, its essence is lost or distorted through the production process in which glass, crystal and urethane coats covers its surface. PixCell-Deer, the representative work of the PixCell series, is the most celebrated work from the BEADS series that cover taxidermied animals with clear crystal beads.

The artist explains that through this process, “the existence of the object itself is replaced by ‘a husk of light’, and the new vision, ‘the cell of an image,’ is shown.” Fittingly his most recent series is titled “PixelCell” (2009-), for which the artist has used taxidermy animals, including deer, cheetahs, rabbits, and coyotes. Nawa has also founded an artist collective space dubbed “Sandwich,” through which he takes on mutli-disciplinary design projects. In 2011, he was approached by Rei Kawakubo to design headwear for Comme des Garcons’ Spring/Summer 2012 runway show.

Having launched his artistic career in 1999, Nawa has participated in various group exhibitions including a show at SCAI The Bathhouse in 2004, Galerie Kashya Hildebrand in Switzerland in 2008, The Ueno Royal Museum in 2009, and Saatchi Gallery in London in 2010.

Nawa currently lives and works in in Kyoto, Japan.