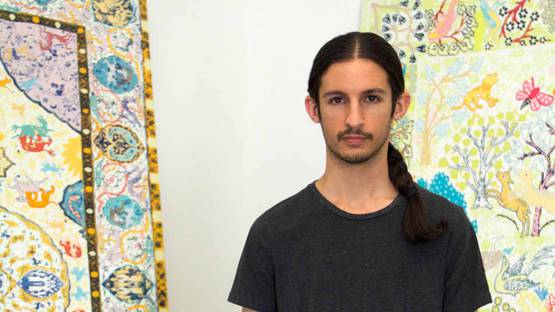 Kour Pour is British/Iranian artist who deals with the concept of Persian tribal textile designs synthesizing the traditional cultural patterns into paintings representing the rituals of the animal hunt with vibrant colors and faded symbolism. His painting communicates the impact of reproduction and what happens to culture/meaning/society when it is represented in different media such as the internet and digital images, playing with issues of authenticity and simulation. The rug paintings are hand painted and then sanded to create a faded or antiqued effect. The image of the carpet looks textured but is actually flat, much like what happens to an image online from where Pour obtains his source material.

Born in Exter, England, Pour later  graduated in 2010 on BFA, Otis College of Art and Design, Los Angeles. During his childhood he remembers his beginnings  saying :"Carpets were a part of my childhood growing up in England. I remember my Father’s rug shop, and how he would hand-dye sections of carpets that had faded away, in order to bring them back to their original colors. I felt that in doing this, my Father was making an effort to maintain all their history and meaning, as if he was bringing the carpets back to life." As he moved to Los Angeles he felt that his own history partially disappeared, much like what happened to those carpets.  For Kour Pour, Persian carpets aren't simply decorative artifacts; his meticulous and attentive selection of rugs dating from the 16th century to the 1960's traces a history of the modern age. The commingling of imageries in these paintings points to ancient encounters between different cultures and the resulting compositions are a testament to those early exchanges that led to the development of modern taste.

By recreating carpets, Pour highlights their meaning as object, as well as the implications of their surface design. They signify an object of privilege (as their originals come from an auction catalog), and our commodity-based consumer culture. Beyond that, the patterns of animals and men on horses is representational of globalization, a culture’s history, and more.