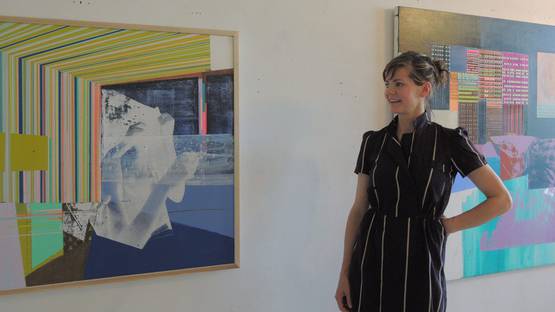 Kristen Schiele is an American artist who works in collage, installation and painting and creates striking semi-abstract pieces. She likes to work in a range of media in order to keep things interesting.

The source of Kristen's inspiration are films, stage sets, folklore, allegory, kitsch, storytelling and the lack of regular patterns in life. Growing up in the United States and Germany, she was influenced by different worlds and languages. The artist starts her work by collaging together sketches and images from her library, working on up to fifteen canvases at the same time.

Schiele creates her small paintings, which resemble movie stills, on prepared panels with 70s pulp magazine cut-outs. They are set in a frame with layers of Plexiglass, stenciled and etched. However, she is most comfortable at large-scale, where she combines materials, techniques, and images in her canvases, fusing collage and silkscreen.

She arranges her canvases into tight, asymmetrical compositions, making her works bright, eye-catching and cleverly constructed. German B movies, biker magazines or graffiti near her studio in Greenpoint, Brooklyn can be seen in Schiele's works. There is a sense of a storyline that runs throughout her works. It reflects her view of art as a form of dialogue.

Kristen Schiele has lived and worked in both the United States and Germany. Every few years, the artist's family would move to the United States as her father moved because of the company he worked for, before relocating to the Frankfurt area in Germany. Kristen went to Indiana University in Bloomington where she earned her Bachelor of Fine Arts in 1993. She earned her Master of Fine Arts from American University in 1995 and attended the Hochschule der Kunste in Berlin.

Her work has been featured in numerous publications. She has exhibited her work in solo and group exhibitions in the United States and Germany since 2004.