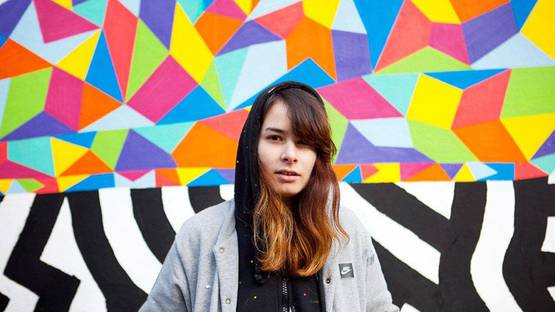 Angela Ferreira, also known as Kruella D'Enfer, is an Portuguese artist born in 1988 in  Tondela, Portugal on a stormy Halloween night and this might explain her fascination with the strange, the surreal and complex world that lives in her ideas. With the help of brushes, sprays, markers, she's able to expose different scenarios and characters that pop into her mind.

Ferreira studied Ambient Design in ESAD, Caldas da Rainha, Portugal  but in 2010  decided to drop out to be a self taught artist.

Decision to drop out college led her to "just start doing stuff on my own", so she participated a lot in collective exhibitions all over Portugal and try to find cool projects for her to learn how to grow as an artist. So, just the fact that she met a connected with a lot of new artists and styles that she wasn't aware of, made her feel highly motivated to do creative stuff.

Talking about her creative and artistic roots Angela states: "I could say that when I was in high school learning out to paint my first oil canvas and doing some cool portraits with watercolors I was feeling pretty good about that but never at the time I thought I could be an artist, illustrator or even paint murals. So i guess 5/6 years later I finally realized that it could be an option, risky option, but the best one I did in my life."

She mix a lot of a more abstract surrealistic style, like patterns and scenarios with some of a more figurative elements, like animals and plants. Also uses a lot of colors,  making her style and palette recognizable, and trying to combine it also with some black and white drawings that she like to spend more time on details, like some kind "dotwork". Anglela summarise it: "I like how these different ways and mediums that I work with, they give me the sense of creative freedom."

Inspired by the fantastic underworld of old-school tattoos, future music, constellations, galaxies and all that surrounds her, she can always find different ways to express her creativity, whether on a wall, fanzine, a mixtape cover or just on a napkin from a restaurant .

Although her permanent creative base is in Lisabon, Angela is currently in a middle of a creative adventure experience in Thailand for a 6 month period.