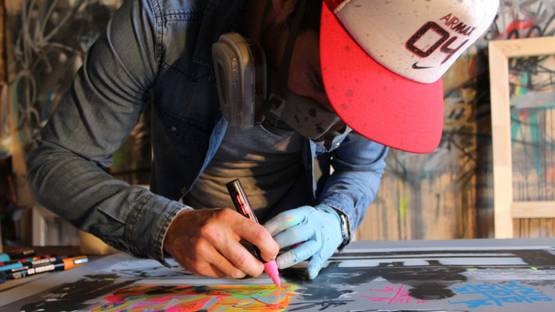 Kurar is the pseudonym of a French artist whose work often addresses complex social issues such as post-urbanization, climate change, terrorism, and violence in local and global terms. In his practice, the artist highlights the important ideas and details by utilizing contrast, mainly between gray, black and fluorescent colors to make the subject and messages of the piece come out intensely. His witty and clever artworks have been included in numerous individual and collective shows worldwide.

Born in 1983 in France’s city Clermont-Ferrand, Kurar started to have a genuine interest in graffiti in the early 1990s, at a time when we couldn’t have talked about a street art scene, in France or anywhere else. There was no art market as we know it today nor any street artist’s exhibitions. It was all about the passion that the artists shared with friends. Kurar used to paint in brownfield sites for the space that allowed him to realize wall frescoes. Although he is today best known for his stencil art, the mysterious creative did not immediately start painting with stencils. At first, Kurar worked on 3D lettering, but over the years, he developed his distinctive stenciling techniques in order to express more concrete ideas in a different format.

Who is Kurar? This seems to be the commonly asked question for those who encounter his pieces for the first time. He chose his alias while he was playing with the word "Curare", describing a very poisonous substance extracted from a South American plant formally used by indigenous people to paralyze their target. Even though he didn’t choose that word based only on its meaning, he found it very coherent with his artistic approach. Working on the lettering, the artist modified the word “Curare” into "Kurar" as the letters were more graphical and interesting, so he could create a new dynamic by playing with them.

Over the years, Kurar has developed his stencil techniques in order to express more complex ideas restructured in a more logical and readable format. He uses stencils to express his opinion of the world around us, especially focusing on economic, political and social problems with an emphasis on the evolution of our societies through the decades. Believing that art is a testimony of our history, of our traditions and of our values, Kurar portrays these dysfunctions within a global and artistic approach. He fearlessly tackles some sensitive issues that the world deals with today, and he does it with a pinch of humor and in the manner of an effective wake-up call to our culture and society.

In his work, Kurar fearlessly tackles some sensitive issues that the world deals with today

The main subjects in Kurar’s pieces are children often surrounded by weapon, chains, or symbols of modern age like computers, or shopping bags. He brilliantly uses the symbol of innocence to contrast with the satirical and provocative aspect of these representations and, simultaneously, to emphasize the message and its effects like in his mural entitled And the Light is... (also known as A Girl & TV) painted in Berlin, Germany for Urban Nation group show. Featuring a girl captivated by interesting content on television, we see both the negative and critical side of the piece as well as the artist’s sense of humor and his undoubted talent. And the Light is... (A Girl & TV) was included in Widewalls selection of top 100 murals, painted on the walls across the globe by the world’s leading street and urban artist, during the one hundred weeks starting from 2013 when the magazine was established.

The Phenomenon of Television

The French graffiti artist seems to be quite fascinated with the phenomenon of television, and its effects on the audience’s behavior. His latest series of paintings, custom castings, objects, and installations revolves around the topic of TV and the way it is still an inescapable, ubiquitous factor of our everyday life. TV Rules Your Life was the title of one of his latest solo shows that was on view at Next Street Gallery in Paris in March 2016. His work was also included in numerous individual and collective shows in such countries as Spain, Singapore, Germany, and the United States.

In his oeuvre, the artist depicts his own vision of our current society and its issues. Delicate subjects such as war, religion, and consumer society are all portrayed with poetry, humor, and provocation. Kurar forces us to ask ourselves the question, what is our role in society and how we can make the world a better place. He challenges our expectations toward social, cultural, economic and environmental issues, and opens us up to new ideas.

The artist is represented by We Are Partners Gallery in Paris, Artemisia Gallery in New York City, and GCA Gallery in Nice.

Kurar lives and works between Paris and Clermont-Ferrand, France.