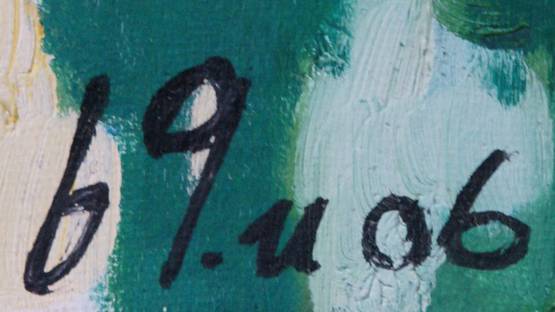 La Ba Quan is a Vietnamese fine art painter, born in 1976 in Nam Dinh Province. His subject of matter are human emotions, joy and sorrow, powerfully depicted in his distorted portraits.

La Ba Quan paints with thick layers of paint, often directly from the tube using a palette knife to achieve his result. Since 2005, he has been working on a series of portraits named The emotion of an old man. This series of paintings, as well as many of his other works, are inspired by his father who endured hardship and poverty during the war time. His paintings directly reflect on his life and his father's life, showing the admiration and gratitude towards his nation, which suffered the painful war period, and whose memories return in Quan’s haunting portrait images. Focused on individual stories and personal conditions, he manages to narrate their living tales and paint their wordless misery, inner feeling and sorrow and sometimes, happiness.

La Ba Quan has participated in several group and solo exhibitions in New York, United Kingdom, the Netherlands and Israel as well as in Vietnam. He works with oil, lacquer, and acrylics, and is also interested in photography.

Quan lives and works in the capital Hanoi, Vietnam.