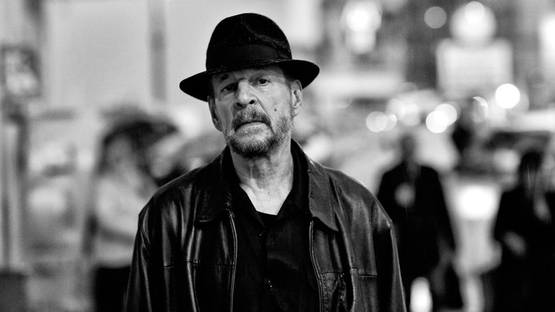 Larry Clark is an American photographer and filmmaker who is best known for his movies Kids (1995) and Ken Park (2002) and photo series called Skaters, featured the skateboarding subculture of the early 1990s. His mother was a baby photographer, and he picked up the family business at an early age. In his teenage years, Clark started to take pictures of his friends doing drugs, marking the start of what would become his signature photographs of teenagers engaged in drug use and sexual activities.

Born in 1943 in Tulsa, Oklahoma, Clark attended the Layton School of Art in Milwaukee, WI.

In 1964, the artist moved to New York, NY, and started to take freelance photography jobs. However, he was soon drafted into the military during the Vietnam War. Clark served from 1964 to 1966, and then returned to Tulsa. In 1971, he published his first book of photography, Tulsa, which documented his friends' use of drugs in black and white. In 1973, he received a Photographers' Fellowship from the National Endowment for the Arts. He also received the Photographers' Grant from the Creative Arts Public Service in 1980. In 1993, Clark directed Chris Isaak's Solitary Manmusic video. In 1995, he released his first film, Kids, which was controversial, as it depicted children as young as 12 drinking alcohol and doing drugs. Kids, and a photo series called Skaters, both featured the skateboarding subculture of the early 1990s. In 2002, he released Ken Park, which featured actors portraying underage characters engaging in sexual activities. The film was banned in Australia, and was not widely released in the United States.

In 2005, Clark was awarded the International Photography Lucie Award for Achievement in Documentary Photography. He has won prizes at the Cognac Festival du Film Policier for Another Day in Paradise and at the Stockholm Film Festival for Bully. His photographs are part of many public collections, including those at the Whitney Museum of Art, in New York, and the Museum of Fine Arts, in Boston, MA. Clark has had solo exhibitions at the Galerie Urbi et Orbi in Paris, France, in 1992; at the Taka Ishii Gallery in Tokyo, Japan, in 1996; and at the International Center of Photography in New York, in 2005.

"I don’t try to be controversial, I just try to be honest and tell the truth about life. Coming from the art world, I never think there are things you can’t do or show. I think that Hollywood films are really underestimating their audience. I’ve been an artist for many, many years. I’m not interested in making films to make money. I’m interested in making work that I’m satisfied with, showing people’s lives that aren’t shown.  If I could see this anywhere else, I wouldn’t have to make these films."