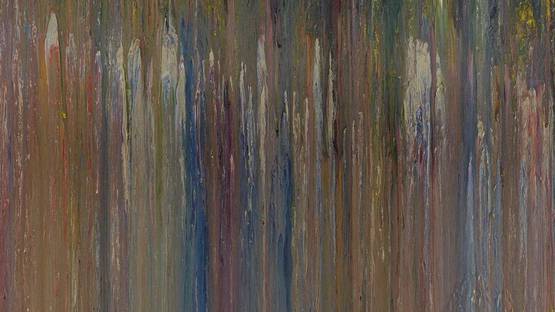 The notable art practice of Larry Poons is marked with a continuous examination of the media of painting. The artist has extensively passed through various stages of experimentation and aesthetically flirted with different styles. The ongoing focus on the formal issues suggests the primary concern for the relations between pictorial elements within the canvas. The light and the color seem to be in the service of composition which is being perceived as a live organism. A peculiar approach to dynamism and harmony is of great importance to the artist so the whole agenda is a plunge in the hidden realms of painterly experience.

Larry Poons was born in 1937 in New York. In 1955, he started attending the New England Conservatory of Music, and two years later transferred to the Museum of Fine Arts, Boston and also studied at the Art Students League of New York. In 1963 Poons had his first solo exhibition at famed Green Gallery, and just two years after his work was included in MoMA’s celebrated exhibition, The Responsive Eye. In 1981 the MFA Boston organized an exhibition of his paintings from the 1970s. The work of Larry Poons is included in major museum and private collections throughout the United States and abroad.

The Right Place In Right Time

Poons found himself in a period of flourishing avant-garde activity in New York’s slightly after the first wave of Abstract Expressionism. Namely, the artist moved to New York in 1958, at age 21, and soon met and befriended
Barnett Newman, who’s work inspired him greatly. The other relevant person was curator Henry Geldzahler, who encouraged Poons to simplify his work and introduced him to the geometric abstractions of Frank Stella. At this early stage, his works were mostly done in a geometric Op art style that drew ideas from both Bauhaus and Minimalist theory, while by the mid-sixties, he moved away from the optical, scientific aspect of his work and toward a more poetic and painterly direction.

Cropping, format, and scale are important components in paintings of Larry Poons

The Technique of Choice

After seeing the exhibition of Jules Olitski at the Metropolitan Museum of Art in 1969, Poons realized that expanded artistic possibilities allowed for more unconventional processes, and that is how he appropriated the expressionistic drip style. These new horizons led the artist to explore surface effects of paint on canvas, so he began to pour, slosh, and drip paint onto the surface; first on the floor and later tacked up to the wall. The move to the wall proved integral, as there he could experiment with the effects of gravity as it pulled the paint down the canvas, producing a powerful directional layout. The use of long rolls of the canvas was in charge so that he would cut only after the paint had dried, that was reminiscent of the work of Jackson Pollock.

The Other Side of Larry Poons

Despite the fact Poons didn’t finish the Music Conservatorium, he never quit music. Namely, he played guitar with The Druds, a short-lived avant-garde noise music art band that featured prominent members of the New York proto-conceptual art and minimal art community in the early 1960s. The artist was deeply inspired by then rising musicians and composers such as LaMonte Young, Phil Glass, and Steve Reich. The other passion which triggered Larry Poons are vintage motorcycles. He was even given special awards from the American Historic Racing Motorcycle Association (AHRMA), including the 500 cc Hailwood Cup in 1998 and 2003, and the 2003 John & Ginny Demoisey Trophy for road racing couples, with his wife, painter Paula DeLuccia.

Although the work of Larry Poons is associated with Op Art, Hard-edge painting, Color Field painting, Lyrical Abstraction and Abstract Expressionism, during the course of years he has developed authentic art practice. Interestingly, the artist has taught at The Art Students League from 1966-1970 and since 1997 until present he teaches there. The concise and focused activity of Larry Poons is abstract and allows a multitude of readings, yet his intense microcosm shows the artist’s immense energy and employment of astonishing rhythmic vitality.