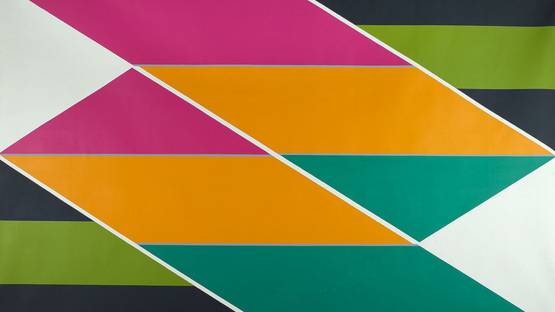 Lawrence "Larry" Zox, born in 1937, in Des Moines, Iowa, was an American painter known for his work in the color field movement of the 1960s. Although many classified him as an Abstract artist, he considered himself to be a Colorist.

Zox was part of an American Lyrical Abstraction movement, which evolved from the Color Field paintings of Hans Hofmann, Morris Louis and Kenneth Noland. In 1958 he moved to New York in 1958 and began making painted collages in which pieces of paper were stapled onto jointed sheets of plywood. This laid the foundation for his later work, replicating this collaged quality by using painted boundaries to create the effect of overlapping space. In 1965, he stated that being contrary is the only way he can get at anything.

Zox utilized color combinations with references to nature, music, or the city that surrounds him. At times, he also used a freer, more intuitive method, while maintaining coloristic autonomy, which became increasingly important to him in his later career. His work ranges from the harmonious to the unexpected, all created with a tremendous amount of technical control.