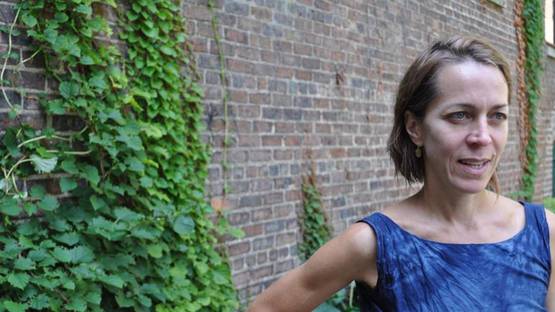 Photographs of food are usually made to make our mouth water but you won't see any or these mouthwatering images when Laura Letinsky sets the table. The photographer who's known for her large-scale still life artworks uses raw images of partly eaten food, dirty dishes and messy tablecloths to explore the tension between the reality of everyday events and perfect images of domesticity promoted by the media. There's something disturbing about these images that simultaneously convey a notion of tension and the destructive forces of humans whose presence is visible in the remainders of their actions.

Laura Letinsky was born in 1962 in Winnipeg, Canada. After graduating from Yale University in 1991, the photographer has started her career by taking pictures of couples in the intimacy of their own homes by creating a series of visual artworks that focused on love and relationships. In the 1990s she made a swift turn to photographing still life that brought her the fame she enjoys today. The artist was attracted to this genre because of a way that food is considered feminine due to its affiliation with home and domesticity. For more than fifteen years, Laura Letinsky has explored this tension between the small domestic matters and large social structures. Her photographs emerge from the process of carefully arranging half eaten pieces of fruit, vegetable, candies and other types of food. The photographer keeps several tables in her studio filled with various food-related objects and images. These objects are then arranged in compositions similar to artworks made by old masters. The compositions are reminiscent of the 17-century Dutch artist's works but unlike the images from the past that depict food normally consumed by the high class, photographs by Laura Letinsky are far less likely to cause envy among the viewers. The artist has modernized the buffet and her images show everyday food including lemons, tea, and ice cream sundaes. Laura Letinsky's use of color offten highlights pastels. Creating the compositions can last from several minutes to several days and arranging the light is equally time-consuming as the artist sometimes spends all day waiting for the light to be just right before taking the photo.

Laura Letinsky takes photography that explores “the problem of the illusion of perfection”[1] Her imagery is far from the flawlessly decorated wedding cakes and perfect pictures of food seen in the magazines. Trough cannibalizing her body of work, every Laura Letinsky photograph presents the moment after, the food that's already eaten and all that's left is to clean up the mess. That's why half eaten apples, dirty dishes, and scattered cake crumbs are a common motif in her work. Laura Letinsky scenery usually involves a setting of a place where someone just got up and left their meal after a huge row. The artist only provides a hint of what may have happened with many things left to the viewer's imagination. Many missing parts of the narrative make people wanting to know more about the photograph, to discover the story behind the composition and the faith of the missing pieces.Though food is the main object on her pieces, photos by Laura Letinsky aren't about the food itself. They are more about exploring human perspective. They are about the way shapes, light and line come together to form the way we observe our environment. In a way, we can even say that her works are about the photography itself. The artist was always attracted by the way that photography equalizes things. In her own confession, the artist has mix filings about the fact that "A piece of schmutz and a Tiffany diamond become the same thing once they’re photographed—they become photographs."[2]

A Professor and a Published Author

Throughout her career the artist published several books including Space/Sight/Self, Now Again, Venus, After All, and her most famous print publication entitled Hardly More Than Ever that encompasses photos taken from the time period between 1997 and 2004. Hardly More Than Ever art book is packed with images of damaged half eaten food as the artist explores the way that the domestic space is constructed on television or in magazines. Unlike popular pictures where homes are always perfectly clean and set up Laura Letinsky created photographic space to comment on the fictional image of a perfect home. Her works present home as it often is - messy, and tumultuous. Apart from being an artist Laura Letinsky is also a Professor in the Department of Visual Arts at the University of Chicago. Recent exhibitions include the Museum of Contemporary Art, Chicago, Gallery m Bochum, Germany, The Photographers Gallery, London, and J.P. Getty Museum, Los Angeles and San Francisco Museum of Modern Art.