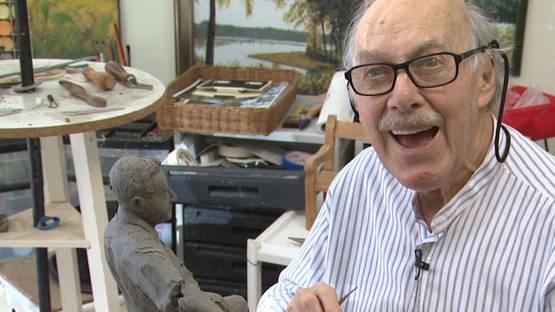 Lawrence Holofcener was an artist whose extensive experience across a variety of arts fields had made him a figure of outstanding popularity. The artist was equally prolific as a writer, a poet, a playwright, an actor and a director but it was the field of sculpture where he left the deepest mark. Lawrence Holofcener has acted in a variety of films and Broadway plays but the role in 1964 musical Hello, Dolly! alongside Carol Channing and Ginger Rogers is likely his most memorable role to date.

Lawrence Holofcener studied at the University of Maryland and the University of Wisconsin–Madison. He started his artistic career by writing lyrics for Your Show of Shows television show and Mr. Wonderful with Jerry Bock of Fiddler on the Roof fame. He went on to write musicals for the theater, including I Don't Live There Anymore. Apart from writing plays the artist also worked as an actor on Broadway where he played in noted musicals such as Stop The World and Hello, Dolly. He also pursued a literary career and in 1960, he edited A Practical Dictionary of Rhymes for Crown Publishers. Sixteen years later, the artist and writer published Day of Change book that was followed by the creation of another British English dictionary entitled Britishisms.[1]

The Accessibility of the Allies

Sculpturing appeared late in the life of the versatile artist who spent his young years playing in a variety of theater shows. The first exhibition was held in 1979 in Charleston South Caroline and it was immediately followed by an array of awards and bookings for new art shows. In 1995 the artist created his most famous sculptural work entitled Allies. The art piece featuring Winston Churchill and Franklin Roosevelt sitting on a bench was unveiled by Princess Margaret in Bond Street. The artist who had both British and American citizenship made a depiction of the most important alliances in the 21st century. The body language shows the emotion of true friendship and comradery as they lean on toward one another. The atmosphere of ease and humor was highlighted with humorous details such as a spotted tie and the unavoidable cigar. The public artwork was commissioned by the Bond Street Association to commemorate the fifty years after the end of the Second World War.[2] The popularity of the piece that brought thousands of visitors to Bond street inspired Catto Gallery to commission Lawrence Holofcener to create a maquette of the piece that was modeled after the real size artwork. There were 50 in the series.

Embellishing the Heart of London and Shakespeare's Home Town

In 1985 Lawrence Holofcener created Faces of Olivier what will be his first artwork in the Icons series that dealt with honoring the life and work of some of the 20th-century greats. Artwork composed of depictions of numerous characters the celebrated actor played during his outstanding career was unveiled by Laurence Olivier himself at Chichester Theatre, in England. Subsequently, the artist created bronze sculptures portraying some of the most influential figures of the 20th century including Martin Luther King, Nelson Mandela, Muhammad Ali, Mahatma Gandhi and Anne Frank. In 2016, on his 90th birthday, Holofcener unveiled the sculpture of a young William Shakespeare in his hometown Stratford.