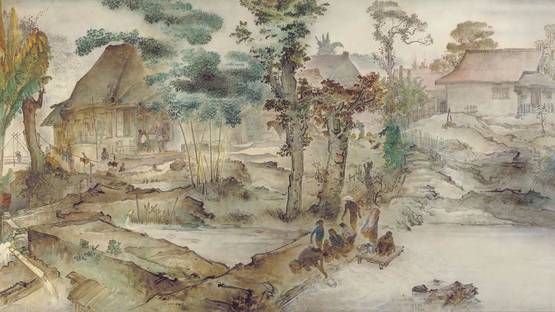 Lee Man Fong, born in 1913 in Guangzhou, China, is one of the most important pioneer artists of Southeast Asia and his importance is growing as more of his paintings are being exhibited and published. Fong moved to Singapore in 1917 and studied at the Anglo-Chinese School until 1929. In 1932 he migrated to Java and worked for Kolff, a Dutch printing and publishing company. In 1936 the head of the Dutch East Indies Association in Batavia invited Fong to participate in an exhibition, a great honor since he was the first non-Dutch artist to be given this invitation. He was married to Lie Muk Lan, a pianist, and their son Lee Rem, born in 1938, also became a painter who would later exhibit jointly with his father.

After 1940 Fong devoted himself full-time to painting. He visited Bali, working briefly there, and held solo shows in Jakarta and Bandung. Artist quickly gained recognition for his paintings of Balinese subjects, many influenced by the work of Willem Hofker. He did a series of large paintings depictiong various activites in Bali’s daily life which are remarkable. Fong held a solo show in Jakarta in 1941, after which he was interned by the Japanese. In 1949 he was awarded a Malino scholarhip to study art in the Netherlands. He was there for three years, and then returned to Indonesia where his talent was acknowledged by President Soekarno, to whom Fong became an art advisor.

From 1955 to 1961 he served as the chairman of Yinhua Meishu Xiehui, Society of Chinese Artists in Indonesia. From 1961 to 1966 artiste served as court painter at the presidential palace. In 1964, Lee Man Fong, together with Lim Wasim, compiled a 5-volume edition of the Soekarno Collection, which also featured many of his own works. During this period Fong was awarded Indonesian citizenship. In 1967, when Soekarno fell from grace, Fong, who was considered close to Sukarno decided to move to Singapore in 1970. His career continued to thrive, and he was often given lucrative commissions by Chinese businessmen who wanted him to paint animals of the Chinese zodiac.

In the 1980's artist suffered from kidney and heart disease, and became increasingly private. Man Fong returned to Indonesia in 1985 and died on April 3, 1988 in Jakarta.