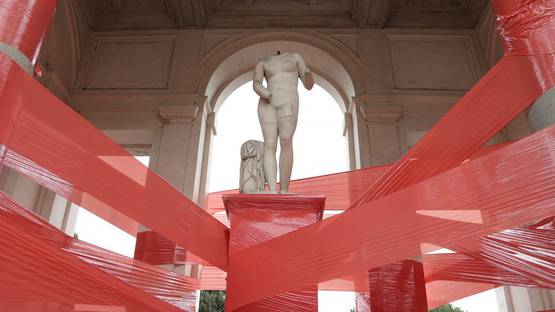 Lek is a French graffiti artist, a member of Da Mental Vaporz crew, who was lucky to live in Paris in the 80s, when the city cradled many graffiti artists. At the age of 16, Lek realizes that the streets in his neighborhood are covered with graffiti, stencils, and tagging. He was living at a time when French graffiti scene was emerging, near the glorious, mysterious place named Stalingrad. A whole generation of teenagers was identifying to the newly discovered lifestyle and wanted to create, produce, and work with it. In this abundance of different styles, Lek found himself on the initiation grounds, where he discovered and embraced the graffiti culture.

Among many influences, works of Rammellzee and Kase2, Lokiss, Jay one, Skki and Echo, are held in high regards for Lek. At the beginning, the inspiration was mostly drawn from the spray can, which made a focal point in the graffiti art. But this wasn’t the only influence that artists of the time wanted to work under. This group of artists in Paris wanted to find their inspiration elsewhere, so together they buried themselves into pictural competitions so they could build their own identities. Willing to experiment and get out of the traditional, American context of graffiti.

The artist looks for influences to break out of the ordinary

The Crew and the Streets of Paris

The French graffiti crew Da Mental Vaporz was formed in 1999 in the suburbs of Paris. The collective grew to a surprising combination of styles and individuals who manage to maintain a creative unit, despite or because of their versatile styles and creative natures. The crew is known for their huge murals representing childlike characters, dislocated dolls, and monsters, conveying cynicism with just a perfect dose of innocence. Their colorful world serves well for the ingenious concepts that Lek provides.

Lek's concepts are ingenious and fresh

Pushing Away the Letter

The letter being the essential element of graffiti, finds itself pushed away by the Lek, who peels it off, blows it up, and diverts it. Having an architecture background, the artist manages to keep his graphic reflexes and the apprehension of materials and mediums. Understanding the volumes, Lek enchases abandoned buildings, houses, and tunnels, trying to blend them in the environment.

From Emancipation To Acknowledgement

During the 1990s, Lek emancipated himself, infusing his work with all the different influences, from Bauhaus to Futurism. He started off in the streets of Paris, only to leave them for abandoned industrial wastelands, thus becoming one of the pioneers of what we now know as urban exploration. The artist constantly travels across Paris suburbs, searching for new places to enrich with his art. But, Lek isn’t just a graffiti artist, in 2009 he co-wrote a book “Nothing but Letters” with YKO. The book was a visual collection of 20 years of graphic experiments, impacting the graffiti intensely. Lek’s work has been exhibited at the Grand Palais in 2006 and 2009, and in 2014 and 2015 he collaborated with designers such as Agnes B and Kenzo, after which he continued his solo and duo projects with Sowat.

The artist is represented by David Bloch Gallery.