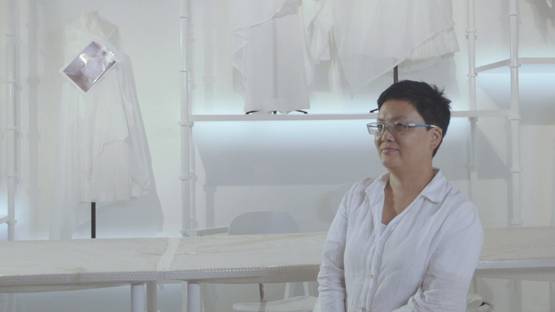 Lin Tianmiao, born in Taiyuan, Shanxi Province in 1961, is one of the first female artists from China to achieve international recognition. Through her use of everyday objects, she explores the relationship of tradition and modernization.

During the 1980s, Lin studied in the Fine Art Department of the Capital Normal University in Beijing and got her BFA in 1984. Following her studies, she moved to New York with her husband Wang Gongxin, a celebrated video artist. They returned to China in 1995, where they now reside. Early in her career, Lin worked as a successful textile designer, later translating her experience along with the crafts of weaving, sewing, and embroidery into her practice as a visual artist.

Best known for her installations, such as The Proliferation of Thread Winding, 1995, consisting of a bed of needles linked to individually hand-wrapped balls of white cotton thread, with a monitor depicting the artist's painstaking handicraft laid beneath a sheer pillowcase, Lin also works in sculpture, photography, video, and a variety of other media. Like The Proliferation of Thread Winding, much of her work addresses women's issues. Lin links thread and the activity of binding and weaving to the female experience and her Chinese background, but the final result evokes a shared human experience for the viewer, regardless of gender, race, or nationality. Conceptual and obsessed with the intricately hand-made, Lin’s work operates within numerous dichotomies such as the private vs. public, personal vs. cultural, male vs. female, natural vs. unnatural, remembered past vs. lived present. Through the use of common materials and the transformation of quotidian objects, Lin evokes personal interpretations for each viewer while maintaining a universally recognized experience.

Since the mid-1990s, her works have been included in every major international museum show on Chinese contemporary art, as well as in many solo and group exhibitions in Beijing, Shangai, San Francisco, Paris and New York, among others. In 2001 she co-founded the Loft New Media Art Center. She had a 2006 residency at the Singapore Tyler Print Institute where she experimented with paper media and printmaking.