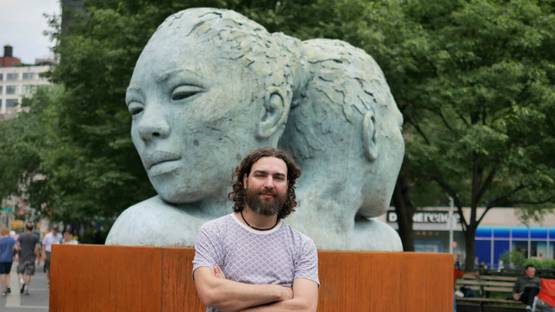 Creating unordinary woman portraits, representational and abstract at the same time, Lionel Smit finds his inspiration in the residents of Cape Malay community. Guided by influences of Francis Bacon’s, Lucian Freud’s and Andy Warhol’s work, he combines gestural brushstrokes, splattered and dripping paint with patches of color applied on the heads of his subjects. Smit’s sculptures invoke many of the same feelings as their two-dimensional counterparts but the addition of depth, in its actuality, makes the images less foreboding and melancholy. The opaque softness of the paintings is replaced with highly detailed hatching, clay protrusions, and grooved surfaces. The layers of intense coloring are reproduced as physically perceivable textures in this medium.

Lionel Smit was born in Pretoria, South Africa in 1982, he started developing and exhibiting straight after art school at Pro Arte Alphen Park. As a son of renowned sculptor Anton Smit, Lionel has made his first artistic steps in his fathers’ studio, and by the age of twelve, he was already working in clay. Smit exhibits locally in South Africa where he is considered one of the countries youngest investment artists. Smit's works have been exhibited at the National Portrait Gallery in London where it received the Viewer’s Choice Award, as well as selected as the "face" of the BP Portrait Award 2013 for all campaigns. He has also been honoured with a Ministerial Award from the Department of Culture for Visual Art. A highlight of his career has been the publication of one of his paintings on the cover of Christie’s Auction Catalogue.

Relationship between painting and sculpture is essential

Moving Limits of the Expression

Smit’s work is deeply permeated with the symbiotic relationship between painting and sculpture. Exploding from the canvas, the aggressively layered colors are a nice smack in the face, especially when juxtaposed with the extreme tenderness with which he treats the portraiture. A planned chaos ensues on the canvas, both swatting away and serving up real-life moments. The eyes of his subjects appear to tell a story which acts on the intellects of those in view. The viewer is often assuaged and provoked at the same time. His sculptures are made of bronze which reveals it to be suited material for his interventions on it. He creates them using one of the oldest known techniques – wax casting method.

Lionel Smit’s art explores identity and ever-changing nature of South Africa’s social landscape. The dialogue between expressive and figurative in his work, reveals the understanding of identity in a context of the multi-cultural environment. The avant-garde approach to the medium has allowed him to constantly move the limits of his expression. Each of his works offers an insight into strong emotions of the faces, whether applied in paint or bronze. His inventive and physically engaging style enabled him to achieve success all over the world.

The artist is represented by Everard Read, South Africa and Rook and Raven, London, UK.

Featured image: Lionel Smit in front of his sculpture Morphous at Union Square, NYC, 2016
All images courtesy of the artist