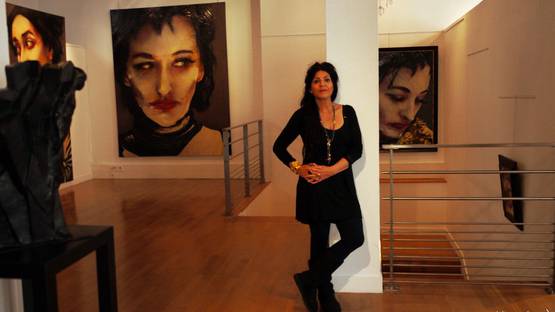 Lita Cabellut, born on 1961 in Barcelona, is a Spanish painter with own typical style that is characterized by larger than life-size portraits in a special fresco technique. Cabellut lived on the streets until the age of thirteen when she was adopted by a prominent Spanish family. In this new period of her life she discovers the Prado museum and become amorous with Goya, Velazquez, Ribera and Rembrandt. She started to take classical paint technique classes four times each week taught by an established master painter and got her first exhibition on the age of 17 at the Town Hall of Masnou, Barcelona.

At the age of nineteen Cabellut decided to change her native country Spain, for new challenges in the Netherlands, where she studied between 1982 and 1984 at the Rietveld Academy in Amsterdam. As early as the year 1988 Lita was well-established enough to earn a living solely from her artistic endeavors. After her study she remained living and working in the Netherlands.

Nowadays, Lita Cabellut is considered as a painter with a unique pictorial language, using a contemporary variation on the fresco-technique and a immensely enjoyable, communicative and recognizable “Cabellut-palette”. Through her distinctive work, Lita is among the contemporary masters of portrait art.

She has achieved world fame with her theatrical portraits in Dubai with Veiled women, in Paris with Coco, in London with Frida and Portrait of Human Knowledge, in Hong Kong with the Behind the Curtain series, in Barcelona and The Netherlands with Trilogy of Doubt and in India with the series about the Dutch Golden Age entitled The Black Tulip.