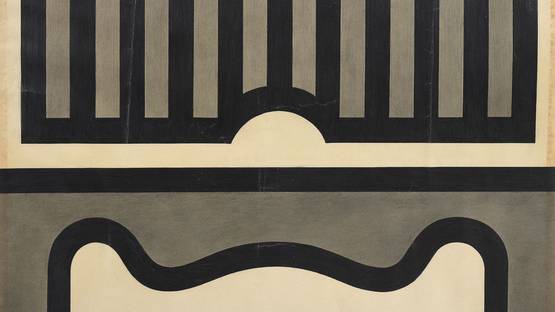 Coming of age in the vibrant, freewheeling, and highly charged art world of the 1960s Los Angeles, Lloyd Hamrol made a name for himself as a creator of conceptual installations with his studio-based work.

Born in 1937 in San Francisco, Hamrol graduated from UCLA and currently lives in Los Angeles. In 1965, he was presented with the New Talent Purchase Award by the Los Angeles County Museum of Art, and was subsequently featured in the museum’s exhibition Five Younger Los Angeles Artists along with Tony Berlant and Llyn Foulkes.

During the 1960s, Hamrol produced laminate-on-wood rectangular units, or “modules,” as an embodiment of his idea of indeterminacy (uncertainty). "Each set could represent the concept, and the narrative could be told through a folding-unfolding game played by the viewer,” he explained. Since the 1970s, he has worked primarily in the field of public art, creating work across the country. In these works, he helped chart the sculptural territory between landscape architecture and architectural space with both monumental and intimate gestures. Made of industrial felt, his recent sculptures integrate the directness of drawing with dimensional form building.