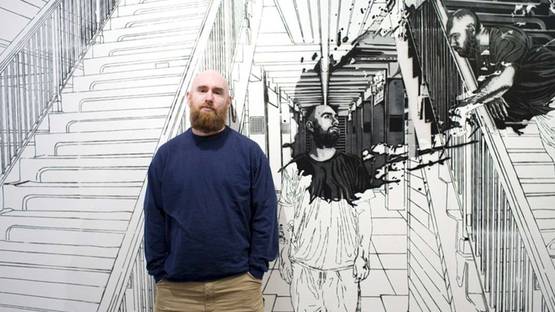 Logan Hicks is a New York-based stencil artist and photographer whose work explores the dynamics of the urban environment. Originally a screen printer, Logan’s work has gained notoriety due to his ability to capture the sometimes mundane cycle of city life in a haunting, yet refined way with his hand-sprayed stencils.

Stenciling started as a substitution for screen printing but quickly morphed into Logan’s medium of choice. A perfect union was formed through stencils: the dirty and gritty nature of the spray paint showcasing the decay of the city while the muted shine of metallic paint mirrored the faint glimmer of hope and life within it. It is this symbiotic relationship with the city that fuels his work.

With Logan’s photorealistic style, Logan draws a parallel between the cold, harsh city and a warm, vibrant organism. It is alive; a breathing creature where the ebb and flow of people washing over its sidewalks act as cells circulating through its veins. Buildings block passageways, walls block views, doors hide openings. The outside world is effectively shut out while the city creates its own reality. Confined spaces on subways, honeycomb living structures; it is a labyrinth of working systems limited only by its border, its ‘skin’.

Logan uses his art to explore the microcosm in which he is a cell, just part of a whole. The nuances of city life that epitomize the urban existence are what he dwells upon.