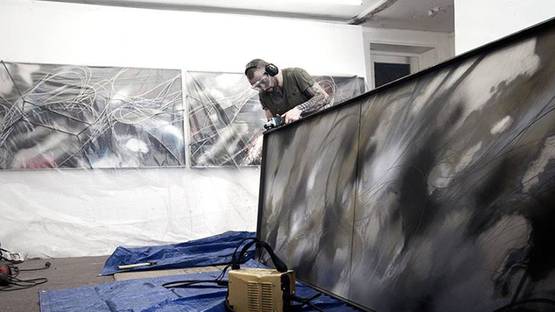 Graffiti art is usually made to poke random passersby, get their attention and make them think. However, there is another side to street art, the one for specially trained eyes only, familiar to the matter. As most of you, street art lovers, are already guessing - we are talking about the Wild Style and its complexity that makes it very hard to read, if the person is not familiar with it. French street art legend Lokiss has been creating wild style letter entanglement – one of the most extreme forms of the graffiti culture - since 1985! Lokiss is a pioneer of wild style in France, and today he is living legend of it. Fortunately for the art world, he didn’t limit diverse talents he has just to walls.

Lokiss first began introducing his creations to the world on the French streets, where he have been developing wild style, upgrading it to what he later described as abstract and aggressive style - where the letters under his hand experienced its deconstruction and fragmentation. By manipulating a letter’s structure, Lokiss established his place in the street art world, just to slide into the galleries, presenting many other artistic forms he was capable of producing. The first logical step was to replace the wall for canvas. It worked! Lokiss’ world of seeming chaos and confusion gained another life through colors and compositions on much smaller scale than walls ever had. By taking the graffiti culture into galleries, Lokiss played a big part in its aesthetic renewal.

Lokiss is also known by many different aliases, like Vincent Elka and Ana Vocera. Under his Vincent Elka alias, Lokiss mainly utilizes new media and video. With one of his projects, Elka was the laureate of Arts Interactifs in the Ars Electronica Festival in 2006, where he stirred up spirits with his work entitled Sho(u)t that was created to abolish any form of hierarchy between spectators and artwork. Under his other alias, Ana Vocera, he developed many Internet writing and music creation platforms.

Abolishing any form of hierarchy between spectators and artwork

Influences that Shaped his Artistic Language

Some of the influences he cites as important to his art language can be found in the works of Czech painter František Kupka, a pioneer, and co-founder of the early phases of the abstract art movement and Orphic cubism. But also in the architectural theories of Lebbeus Woods, his unconventional and experimental designs. Lately, Lokiss found the astrophysics and the quantum mechanical fields extremely inspiring, especially for his recent body of work that mainly includes new media and video.

Lokiss emerged at the street art scene using spray paint and a wall, riding the first Graffiti wave in the ‘80s. His explosive compositions, so free and full of life, took him on to the expedition to the art world. For several years now, Lokiss is focused on his studio work, creating large format paintings, installations, and videos, and he is considered to be a forerunner of one of the most significant alternative movements of the last 30 years.

This artist is represented by Galerie Celal.

Lokiss lives and works in France.

Featured image: profile of the artist, and all artwork images © artist