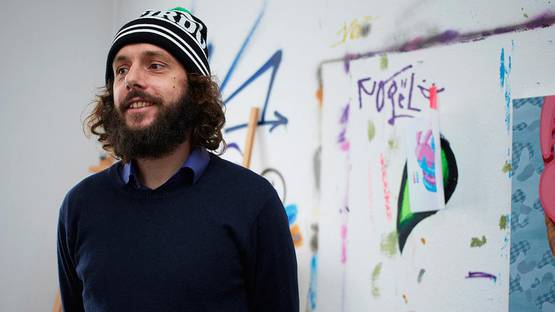 Lars Wunderlich aka LOOK the Weired, is a German contemporary artist, born in 1981, in Neubrandenburg, a small town in the north-east of Germany. He was drawing on from early childhood and went into Graffiti in 1996. Fascinated by all the aspects of aerosol, graffiti became the favorite technique and expression channel of LOOK, remaining so to date.

He started studing art at Universität Greifswald in 2001, and later moved to Berlin where he started studies again, this time it was graphic design at HTW Berlin in 2005. He finished his studies in 2009. Moving to Berlin marked a new era in LOOK’s career, it was the Capital where he met Attila Szamosi also known as Vidam, with whom he initiated a design collective Peach Beach in 2007. Together they have realized loads of different projects in the field of urban art, illustration, graffiti, and design. Their studio is still active, participating in various campaigns internationally.

In 2011 he founded The Weird Crew with 9 other artist who are spread all over Germany and Austria. The ten members come from a graffiti background and focus on high quality character design in unique recognizable styles. They work as artists, graphic designers, illustrators and lecturers. Each one a serious heavyweight styler, they prefer a maverick illustrative way of designing, no matter if the (art)work is private or a commissioned. Being spread out all over Germany and Austria makes it hard to get the whole line-up together in one place at the same time. But each time they managed it, they dropped great walls, finding a lot of enthusiasm among their viewers.

Recent LOOK’s artwork and activities unveil increased number of group and solo exhibitions, as the artist progressively develops himself as a visual artist. Still, his graffiti origins and passions are not forgotten, as he engages in many wall painting activities, seasoned with traveling and collaborative work.